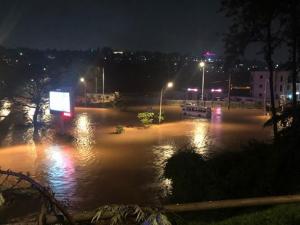 At least 12 people have died and others displaced following a downpour on Christmas night in Rwanda, the government has confirmed.

Olivier Kayumba, the Permanent Secretary in the Ministry of Emergency Management (Minema) on Thursday told journalists that the torrential rain had destroyed 113 houses and 49 hectares of crops across the country.

The downpour also caused traffic chaos in the capital Kigali as roads were submerged in floodwaters.

Kigali City Mayor Pudence Rubingisa said; “64 houses were completely destroyed in Kigali, and we expect that more residential structure that have been weakened by the rains will collapse as well, leaving more families homeless.”

Mr Rubingisa added that the affected families were being hosted by friends and neighbours, while others had been sent to nearby schools pending provision of emergency assistance.

Claver Gatete, the minister of infrastructure said the deluge had taken a toll on road, power and water infrastructures, announcing impending outages as they work to restore services.

Minister Gatete added that water supply was the most affected as key treatment plants was still hampered by high turbidity.

"Turbidity levels have gone way above those we were used to, making water untreatable at Nzove, Kimisagara and Karenge plants used to supply the city. There is a team monitoring the levels but It will likely take longer if we get more rain at this scale,” said Mr Gatete.

Kigali’s risk to floods is exacerbated by inefficient storm water management as a result of faster growth straining its drainage systems.

A 2017 report titled Environment and Outlook Report indicated that the existing drainage systems had not been maintained properly.

Kigali, however, is in discussion with the World Bank to add a component of storm water management in the on-going Rwanda Urban Development project (RUDP) which the later funded to the tune of $95 million.

Experts working on the Kigali City master plan had called for studies to guide the design of drainage routes that can accommodate current and future storm water volumes in view of the 2050 Kigali City growth projection.