14 missing as Tanzania registered plane crashes off the Comoros 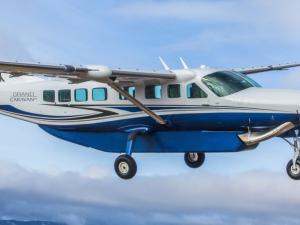 Dar es Salaam. A light aircraft registered in Tanzania and owned by a firm based in Zanzibar has crashed off the Comoros.

The fate of the 14 people on board could not be immediately established following Saturday’s accident. The Cessna Caravan crashed into the sea as it was about to land.

Captain Mohammed Mazrui, whose firm, Fly Zanzibar Limited, owned the aircraft, told The Citizen that the plane was leased to a Comorian carrier, and was flying from the capital Moroni to the city of Fomboni when the accident occurred.

The aircraft had 12 passengers and two crew on-board, with the Comoros government saying the passengers were Comorian and the two pilots were Tanzanian.

Captain Mazrui, who is the director and chief pilot at Fly Zanzibar, said the accident occurred while the plane was leased to AB Aviation, a private airline based in the Comoros. AB Aviation said the plane disappeared from radar about 2.5 kilometres from its destination, with the cause of the accident still unknown.

Reports said rescuers in the Comoros were looking for survivors, but their work was being hampered by unfavourable weather.

The island nation’s transport ministry said debris believed to be of the aircraft had been found.

It added that an operation was being conducted to recover the debris from the ocean.

Senior police officer Abdel-Kader Mohamed told the media in Moroni that three speedboats had been sent to the crash site to search for survivors and collect debris and items belonging to passengers.

“Tomorrow, we will continue with the search. Although we have not found any bodies, there is still hope,” he added.

Support is being offered to the affected families on Moheli and Moroni’s island of Grande Comore.

However, Mr Idi Boina, whose sister was one of the passengers, told AFP in Moroni that he had no hope that his relative could be found alive.

“From tomorrow, we are going to start mourning foe my sister,” he said, somewhat despondently.

The authorities said they had asked for help from the neighbouring French territory of Mayotte.