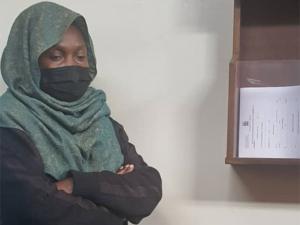 The Uganda National Examinations Board (Uneb) has detected another case of impersonation in the ongoing Uganda Certificate of Education (UCE) examination.

An examination supervisor at St Francis secondary school in Kampala's Kawempe division was shocked to see a male candidate having a female name ‘Rebecca’ on his scripts.
"The supervisor smelt a rat, but at first he stayed quiet and looked around only to find that there was a female candidate who had not yet filled out her name on the script and when the supervisor requested her to write her name, she instead wrote a male's name,” Jennifer Kalule, Uneb spokesperson told our reporter.

According to Kalule, the supervisor called the police and the scout, and on interrogation, it was discovered that Rebecca Munyezi, 30, had procured the services of a one Asuman Kidawuli to write her Uneb exams.
“After noticing that they had been spotted, Kidawuli disappeared," Kalule said. "We have not been able to establish his whereabouts as the police are still hunting for him,” added Kalule.

Munyeza and Kidawuli were both properly registered as candidates at the same centre, just like was the case at Kawempe Standard SS where an aunt paid a male mercenary to write a niece's examination. It is alleged that Munyeza paid Milly Nanteza Matovu, the school's headteacher, Shs 2.5 million to facilitate the crime.

Uneb senior legal officer Annet Kemaali, also informed our reporter that further research revealed Munyerezi was taking the UCE for the second time after sitting nine years ago and failing in 2013.
"This data was not provided," Kemaali said. "The candidate was enrolled by the headteacher, Ms Milly Nanteza Matovu, as though it were her first time taking the exam. All three, the headteacher, the candidate and the hired impersonator were complicit in the scheme.”

Although Kidawuli is on the run, Munyeza and Nanteza have already had their day in court, having been arraigned before Nabweru grade one magistrate Christian Kibuuka on Friday afternoon.

In court, Munyeza admitted to the charges, was found guilty as charged and then remanded to Luzira prison pending the imposition of her sentence on November 1. Nanteza, however, refuted the accusations and was released on a cash bail of Shs 500,000.

Meanwhile, Kalule added that the board is concerned that the same school may have had more than 15 impersonators. She observed that the said candidates skipped sitting for the compulsory papers after Munyeza’s arrest.
"There is no other explanation as to why 15 candidates who have been writing their final examinations failed to appear in such a manner," she said. "There's no way it's a coincidence. The board and police are already collaborating to conduct more investigations into this problem.”

After Uneb intensified the fight against examination leakages to a great extent, there is a trail of evidence indicating that impersonation is developing as the newest, most sophisticated kind of malpractice. The board has so far documented four instances of this type of malpractice occurring in the districts of Butebo, Kagadi, and Kampala this year alone.

Impersonation-related charges have this year resulted in convictions for two individuals so far. Last week, Amina Nalwadda was found guilty and fined Shs 4.8 million by the Nabweru court for paying for the registration of a senior three boy from St. Janan School to take her niece's examinations in addition to Munyeza, who is awaiting her sentencing.

According to the new UNEB Act, impersonation is a crime punishable by a fine of up to Shs 20 million, or a prison sentence of up to five years, or both.
https://observer.ug/news/headlines/75691-30-year-old-woman-procures-merc...