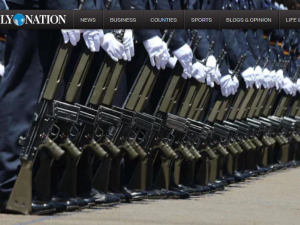 At least 300 police will continue serving in the force despite facing disciplinary cases. The officers were vetted by the National Police Service Commission (NPSC) and are waiting reports that will determine their fate.

The vetting was conducted under former NPSC chairman Johnston Kavuludi who completed his six-year term in October last year.

The new commission’s chairman Eliud Kinuthia Tuesday said that the officers have a “second chance” to reform even as he announced that more than 37,000 officers will not be vetted since they joined the police force after NPSC came to effect in 2012. “There are about 300 officers who were working with a lot of worry because reports of their vetting are not yet out. “But I want to announce here today and tell those officers not to be worried and should be settled and work. None of them has been found to be suitable or unsuitable. They now have a chance to do better,” said Mr Kinuthia.

Cases of police officers gone rogue have been on the rise, causing public fear over security and justice. Some 48 police officers have been arrested and charged in court for various crimes in the last two months. Speaking to journalists in Mombasa, Mr Kinuthia said that the commission would maintain status quo on the handling of misconduct cases.

“That is normal because if you have one area that you are not doing well would you want to be chased away or be given another chance?” Mr Kinuthia posed. He was at the Coast regional police headquarters for consultations with police commanders accompanied by other members of the new commission. He noted that NPSC would not reopen cases of some 448 officers who were dismissed after being found culpable of gross misconduct. “Those that were dismissed are the ones that we are not going to consider... their matter had already been closed,” he said.

The commission’s chief further announced that they would no longer hold vetting under the full glare of cameras to save the officers from “public ridicule”. He said the appraisals would be done in confidentiality with regional intelligence officers playing key role in providing information of the vetted officers. “Vetting will be there as normal. We will now be doing it in collaboration with other security stakeholders who will also share information about the conduct of those officers that we intend to assess,” said Mr Kinuthia.

The stakeholders, he said, include the Office of the Director of Public Prosecution, the Independent Policing Oversight Authority, the Ethics and Anti-Corruption Commission (EACC), among others. The involvement of the stakeholders, he added, would save the police from the sense of subjectivity.