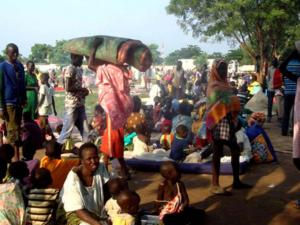 The report comes on the heels of a warning by the United Nations last month that the world's youngest country risked a return to war, with bouts of interethnic violence and political infighting threatening to undo even the limited progress made in implementing a stuttering peace process.

"Grave human rights violations and abuses, including hundreds of killings, were committed against civilians during fighting in Tambura County, Western Equatoria State," according to the joint report issued Tuesday by the United Nations Mission in South Sudan (UNMISS) and the UN Human Rights Office.

It blamed members of the armed forces loyal to President Salva Kiir and rivals in the Sudan People's Liberation Movement/Army in Opposition (SPLM/A-IO) of Vice President Riek Machar, and "their respective affiliated militias" for the violence.

Between June and September last year, at least 440 civilians were killed in fighting between rival groups in Tambura county, 18 injured and 74 abducted, the report found.

At least 64 civilians were also subjected to conflict-related sexual violence, among them a 13-year-old girl who was gang-raped to death, it said, while at least 56 people were reported missing during the June-September period.

In addition, some 80,000 were forced to flee their homes to escape the fighting, it said.

"Looting and destruction of property, child conscription, attacks on personnel and facilities, hate speech and incitement to violence were among the other human rights violations the investigation uncovered."

The report said a large number of victims and witnesses interviewed "depicted men armed with AK-47 rifles as well as machine guns... and other weapons including machetes, knives and clubs".

The attackers often moved in small groups, dressed in black, concealed their faces and spoke a combination of languages -- Azande, Balanda and Arabic, it said.

The Tambura region, which lies not far from the border with the Central African Republic, has long been the scene of rivalry between the Azande and Balanda ethnic groups.

The UN report said those suspected of instigating and aiding the latest Tambura violence included high-ranking military officials and community and religious leaders.
"We call on all parties to the conflict to hold to account all individuals implicated in the killings, rape and abductions, among other grave human rights violations," UN High Commissioner for Human Rights Michelle Bachelet said in a statement.

"The perpetrators of such brutal violence against the men, women and children of South Sudan cannot be left to benefit from impunity," she added.

The country has suffered from chronic instability since independence in 2011, including a brutal five-year civil war between forces loyal to Kiir and Machar that cost almost 400,000 lives.

Two years ago the two men formed a unity government, cementing a peace deal signed in 2018 that brought an end to the conflict.

But since then, South Sudan has lurched from crisis to crisis, battling flooding, hunger, as well as violence and political bickering as the promises held out by the peace agreement fail to materialise.

Key provisions are yet to be implemented, with less than a year left before elections are due to be held.

The failure to form a unified armed forces command -- a key component of the peace deal -- has created an environment in which violence remains rife, the UN says.

"There is a real risk of going back to conflict," Yasmin Sooka, head of the UN Commission on Human Rights in South Sudan, told journalists during a visit to the country last month.