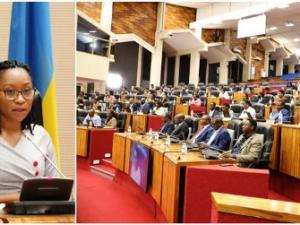 Jeannette Bayisenge, the Minister of Gender and Family Promotion, has said that Rwanda has a long way to go to end gender-based violence, because the majority of women still support wife-beating.

Appearing before parliament on Tuesday, November 15 to answer questions about family conflicts and problems affecting society, Bayisenge said 65 per cent of women think a wife can be beaten.

She cited findings of the Demographic and Health Survey of 2020 on the women’s and men’s attitude about wife-beating.

The figures suggest that women are more supportive of wife-beating than men.

65 per cent of surveyed women said wife-beating was justified under certain circumstances.

18 per cent of women who were asked said a wife should be beaten when she has not cooked well, only 2 per cent of surveyed men agreed.

31 per cent women said the wife can be beaten if she has an argument with her husband, 6 per cent men agreed.

“When a wife doesn’t look after the children well, 40 per cent of surveyed women said it was justifiable to beat her, 13 per cent of men agreed. Fortunately, fewer men find wife-beating justifiable,” Bayisenge said.

61 per cent women said it was justifiable to beat a wife if she cheated on her husband, 36 per cent of men agreed.

“You know how long we have been teaching about gender equality, this is where we are today,” Bayisenge told lawmakers.

“If we still have 65 per cent of women who said they can be beaten under the said circumstances; these women are the ones who have a bigger part in educating their children.”

Bayisenge added that the attitudes contributed to gender stereotypes, such as the belief that certain activities are meant for women.

“I want to show you that the battle we are fighting is not as easy as we might think,” she said. “Mind-set does not change overnight, which hinders our many strategies.”

Nonetheless, Rwanda ranks first in Africa and sixth globally in terms of gender equality, according to the Global Gender Gap Report by the World Economic Forum (WEF).

The WEF estimates that it could take 132 years to close the gender gap, in economy, political participation, education, among other sectors.

Bridging the gender gap in the economic sector alone could take up to 200 years.

“We have seen a model in Rwanda, when those in the justice sector said it would take 100 years to try genocide suspects. But with Gacaca, they were tried in a few years.”

If bridging the gap in the economy can take 200 years, then it’s time to consider unconventional approaches, said MP Justine Mukobwa, adding that every institution should take part in the efforts, with the ministry in charge taking the lead.