70% of waste in Kigali to be converted into fertilizers 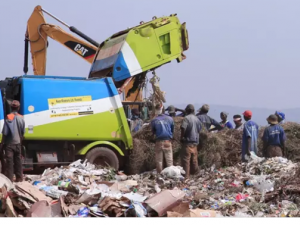 The call was made on Tuesday, February 8, as the city launched an exercise to distribute sacks to help households sort waste before they can be collected for dumping at Nduba landfill in Gasabo district.

The distribution of sacks started in the sectors of Kimironko, Kacyiru, Niboye, Muhima, Nyakabanda as a pilot phase.

According to estimates, waste dumped at landfill sites in the City of Kigali has increased threefold from 141.38 tonnes every day in 2006 to 495.76 but it has been difficult to sort them out at the landfill for better utilization.

The modern landfill, he explained, could have different features which include a section that receives methane gas discharged from the dumpsite, water, organic manure among other byproducts.

He said that besides increasing agriculture productivity, the organic fertilizers could also be used to make Kigali city gardens green and healthy.

Once sorted recycled, Mugabo explained, the cost of waste management could also decrease.

He said that 30 percent of waste in Kigali is solid waste and should also be recycled.

“Of this 10 percent are plastic bottles, five percent are paper, all which can be recycled. We have over five recycling companies that can do it. Such waste is raw material for them and sorting out the waste could ease their work,” he said, adding that sorting waste will attract investors in waste management.

Some of the waste from the landfill, he added, could be recycled into pellet-type of cooking fuel used.

“If households sort the waste well, we might again subsidize the cost which they pay companies that transport such waste to Nduba landfill. The sacks being used to sort out waste keep water and gas inside the sacks and never leak out,” he noted.

Paulin Buregeya, a consultant in waste management and CEO of COPED-an environment protection company that transports waste in Kigali city said that private companies should plan additional investments to transport sorted waste once the sorting pilot phase is successful.

“The companies can have trucks dedicated to each type of waste or have a truck with one room for transporting soft waste and the other for solid waste. The exercise to sort out waste at household level will inform us which more investment we can add in,” he said.

He added the next step could attract recycling companies to buy sorted waste from households as long as they easily get raw materials for their factories.

At least Rwf4 billion could be invested in a newly launched three-year project to revamp waste collection and management in the City of Kigali and promote technology transfer in turning waste to valuable resources.

According to 10-year climate plan from 2021 to 2030, Rwanda also plans to invest $28 million in extraction and utilisation of gas landfills (LFG) for power generation which will then reduce methane gas emissions in the air.

Instead of releasing them into the air, landfill gases can be captured, converted, and used as a renewable energy resource.

The country also seeks to invest $8 million in setting up Waste-to-energy (WtE) plants.