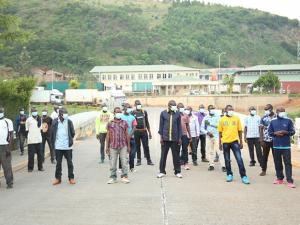 A total of 79 Rwandans were on Monday, June 8, deported from Uganda after being illegally detained there for varying periods.

A handover ceremony took place at the Kagitumba One-Stop Border Post between Rwanda and Uganda and was overseen by immigration officials from both countries. It was also witnessed by officers from Rwanda National Police and Rwanda Defence Force, among others.

The group is part of the 130 Rwandans that Ugandan government promised to set free during their latest round of talks with Rwanda last week. The meeting took place virtually due to the Covid-19 pandemic.

The two countries have been holding talks for several years now in an effort to normalise their relations.

Upon arrival, their temperatures were checked, before they proceeded to wash their hands in accordance to Covid-19 preventive guidelines.

Most of them looked frail and some were barefoot.

Speaking to the media, some narrated how life was hard while in Uganda’s detention centres.

Innocent Hakizimana, 22, who hails from Ngororero District, said he had gone to Uganda at the end of 2017 looking for a job.

“I was given six months to stay in Uganda,” said.

But things took a turn for the worse the following year. “On the last day of that period in 2018, I went to Kisoro border trying to come back to Rwanda but I was denied to cross and wrongly accused of overstaying in Uganda.”

Hakizimana went on to add that he and other innocent Rwandans who had been rounded up around the same time were kept in jail and later dragged to court. They were hastily sentenced to two years each, he said.

“Life in Uganda’s detention was miserable. We could wake up early in the morning, taken to nearby farms where we tilled land for about 10 hours a day,” he narrated, adding; “At times we would be beaten to work harder.”

“Returning home is a huge a relief”

26-year-old Jean Bosco Mbarushimana is among those who returned home Monday, having spent one-and-a-half years in a prison in the western district of Kasese.

He said he had also been subjected to hard labour, adding he was relieved to be back home to Rwanda. “I thank Rwanda’s leadership for standing up for us, I did not believe that I would be released from prison. I am happy that I will finally meet my family again.”

Mbarushimana added: “There are other innocent Rwandans still held in Ibuga Farm Prison where I was detained.”

More set to be released

After clearing at the immigration office, the group was taken to Rukara Isolation Centre in Gahini Sector, Kayonza District for Covid-19 testing.

It is expected that Uganda will release more Rwandans on Tuesday, June 9, and these will be received at Cyanika border.

Illegal detentions of Rwandan nationals in Uganda is one of the issues at the heart of strained relations between the two neighbours, the other being Kampala’s alleged support to anti-Kigali militia groups and economic sabotage.

The countries have since held a series of high-profile meetings, including at the Heads of State level, under the facilitation of Angola and DR Congo, but the latest development is part of efforts toward finding a lasting solution.

The last meeting of the four Heads of State took place in February at the Gatuna border post between Rwanda and Uganda.