Afghan schoolgirls to be evacuated to Rwanda 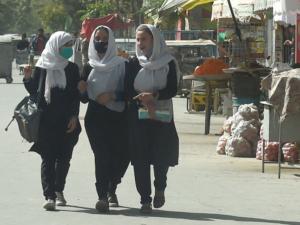 Dozens of Afghan schoolgirls, faculty and staff of the war-torn country's only boarding school for girls will be evacuated to Rwanda, the institution's founder said Tuesday, following a Taliban takeover earlier this month.

The militants have repeatedly promised a different kind of rule to their brutal regime of the 1990s that saw girls barred from school, women confined to their homes, most entertainment banned, and stonings and public executions used as punishments.

But since their August 15 takeover of Kabul, Afghans have grown increasingly desperate to escape the country, with many terrified of facing life under the Taliban.

On Tuesday, Shabana Basij-Rasikh, the founder of the privately-run School of Leadership, Afghanistan (SOLA) said that nearly 250 adolescent students, faculty, staff, and family members would decamp to Rwanda to continue their education for the next several months.

"Everyone is en route, by way of Qatar, to the nation of Rwanda where we intend to begin a semester abroad for our entire student body," she said on Twitter.

"When circumstances on the ground permit, we hope to return home to Afghanistan," she added.
In Kigali, government spokeswoman Yolande Makolo confirmed the news.

"We welcome the SOLA community to Rwanda. We are respecting their request for privacy so there will be no further comments at this time," she told AFP.

Days earlier, Basij-Rasikh said she was burning her students' educational records, in an effort "to protect them and their families".

"My students, colleagues, and I are safe... But right now, there are many who aren't or increasingly don't feel safe. I'm broken and devastated for them," she wrote Friday on the school's website.

The UN rights chief warned Tuesday that the Taliban's treatment of women and girls was a "fundamental red line".

Speaking at the opening of an emergency session on Afghanistan, Michelle Bachelet urged the militants to honour commitments to respect the rights of women and girls, and of ethnic and religious minorities, and refrain from reprisals.

"The onus is now fully on the Taliban to translate these commitments into reality," she said.

Bachelet added that her office had received credible reports of serious violations in places that have been under Taliban control, including summary executions, restrictions of women's rights, blocking girls from attending school and recruitment of child soldiers.

In addition to Rwanda, Uganda is also considering a US request to take in Afghan refugees, with unconfirmed media reports last week suggesting that Kampala had agreed to host some 2,000 people from the country.

Aid agencies have repeatedly said that the international response to support refugees in East Africa has been underfunded, with the UN World Food Programme slashing its monthly assistance to refugees in Rwanda by more than half this year.