The African Union sends condolences to Burundi over the loss of 6 soldiers in Somalia. 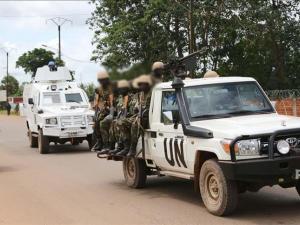 The Chairperson of the African Union Commission, Moussa Faki Mahamat, has sent its deepest condolences to the Burundi government and its people over the loss of the 6 Burundian soldiers killed by Al Shabaab militants in Somalia on Saturday.

The African Union representative in his statement, has condemned in the strongest terms the attack perpetrated by Al-Shabab militants against AMISOM personnel, which led to a number of casualties.

“We are united in grief with the families of the fallen soldiers, the people and Government of Burundi for the loss of the brave troops who made the ultimate sacrifice in service of, and support to a fellow African nation in combating terrorism.  We wish the injured a speedy and full recovery,” the Chairperson said.The Chairperson reaffirmed that the AU remains committed to working with the Government of Somalia to further consolidate peace and security in the country, the statement adds.

The Chairperson further calls on the international community to provide appropriate support to Somalia and AMISOM to consolidate security gains in the country.

The Burundi military spokesperson, Floribert Biyereke, had confirmed the attack on Burundian troops in Somalia.

“Elements of the al-Shabaab terrorist group have attacked Burundian soldiers of the Somalia Peacekeeping Mission (AMISOM) in Balad district, located about 30 kilometers northeast from the capital city of Mogadishu,” Colonel Floribert Biyereke, spokesman of the Burundian army said late Sunday.