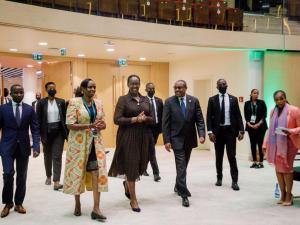 The First Lady Mrs Jeannette Kagame says good nutrition is key for the African continent and the world to achieve health and other social welfare targets, which calls for urgent efforts to invest in Agriculture.

The First Lady made the observation on Wednesday as she delivered a keynote address at the 12th Africa Green Revolution Forum (AGRF) special session for First Ladies, which discussed the role of women in boosting food systems.

Mrs. Kagame pointed out that the theme of the summit “Grow, Nourish and Reward – Bold Actions for Resilient Food Systems” augurs will with the African Union (AU) Agenda 2063, and the 5Ps of Sustainable Development within Agenda 2030, namely: People, Planet, Prosperity, Peace and Partnership.
She pointed out that the theme is ideally situated to reinforce the African Union’s Year of Nutrition and this should be the time to advance the agenda of improving nutrition on the continent.

“In matters of health, individual and social progress, and indeed overall welfare, nutrition is the inception point. Good nutrition is the cornerstone of health, peace, holistic wellness and prosperity,”
“It is well known that people with healthy eating habits and patterns, avert obesity and Non-Communicable Diseases, notably heart disease, diabetes, and even some cancers,”
“Therefore, to champion good nutrition across the world, is a necessary feature of any responsible leadership,” Mrs. Kagame said.

Referencing the 6th edition of the Global Report on Food Crises which came out in May, the First Lady pointed out that there are valid reasons to believe that urgent action is needed to avert future food crises and shocks, which have a direct bearing on nutrition.
“According to this report, the alarmingly high incidence, of acute food insecurity and malnutrition, starkly exposes the fragility, of global and local food systems, that are under mounting strain, from the increased frequency and severity, of weather extremes, the COVID-19 pandemic, increasing conflict and insecurity, and rising global food prices.

The interconnectedness of drivers, is further laid bare by the unfolding war in Ukraine, which not only compromises the food security of those directly affected by the war, but compounds existing challenges, faced by millions of acutely food-insecure people, worldwide,” Mrs. Kagame said, quoting the report.

Raising the alarm, Mrs. Kagame said that it is projected that 660 million people may still face hunger by 2030, half of whom will be on the African continent.
“This reiterates why peace and security are non-negotiable. One of the main drivers of food insecurity in Africa is conflict. Conflict, creates internally displaced persons, who are no longer able to till their lands, and maximise production,”

“Other factors include the high cost of food – where it is available – income inequality, and climate variations,” she pointed out, adding that as the AU has previously said, the continent faces two polar nutritional problems which must be addressed urgently.
“We are now suffering from both undernutrition and obesity. I shall not venture into explaining to the experts in this room, why obesity is less distant from undernutrition than we might think…..”
“….and why a lot of the modern manufactured diets we espouse, may well leave us both lacking in nutrients, and at the same time alarmingly overweight. How do we achieve healthy, balanced, farming and fishing-based diets?” Mrs. Kagame pondered.

She pointed out that there is a need to return to indigenous agricultural practices, greater consumption of bio foods, and regular exercise, to purge lifestyle-related diseases.
Mrs. Kagame said that as the continent looks to achieve a 40% reduction target in stunting, in children aged under 5, by 2025, African countries can learn from each other, citing Rwanda, Senegal and Ethiopia as some of the African countries commended for making progress in reducing stunting.

Mrs Kagame highlighted several innovations in Rwanda that address the issue of food insecurity and nutrition, including focusing on beans as a superfood, among other initiatives.
“In our land of a thousand hills, over 90% of rural households grow beans, across all agro-ecological zones, contributing to 32% of their calories intake, and 65% of their protein intake,”

“This leads to less reliance on red meat, which is growing less affordable, is widely linked to diseases such as gout, and is known to increase greenhouse emissions,” she said.
She added that Rwanda has also strived to diversify its approaches to combating child stunting, relying on nutrition-sensitive development frameworks, including rolling out successful models of Early Childhood Development Centres (ECDs) across the country.

Mrs. Kagame hailed the partnership between the Government of Rwanda, her own organisation Imbuto Foundation and partners like UNICEF, to establish ECDs which prioritise healthy nutrition and healthy habits, for children in and out of school.

“The Rwandan Government has instilled, and actively monitors the implementation of food-related policies, enriching the most consumed condiments: maize flour, wheat flour, oil, sugar and salt,” Mrs. Kagame said.
“Rwanda has instilled a one cup of milk per day per child policy, which complements the country’s attribution of over 400,000 cows to families in need.
Similarly, locally instilled practices are school-feeding for children, and our 3 fruit trees per home campaign,” she added, making a case for homegrown solutions.

The First Lady challenged global leaders and participants in the AGRF 2022 to use the opportunity to discuss the critical issues and come up with concrete solutions that will accelerate Africa’s economic growth and bring about lasting change.

“The truth is, the facts are alarming. Due to the Covid 19 pandemic, political instability and conflict, climate change and widening wealth gaps, food security has deteriorated, rather than improved, around the globe, over the past couple of years,”
“I say alarming, but not damning; budget reallocation, strategic policy adjustments, and determined advocacy, could put us on the right track to meeting our global 2030 “Ending World Hunger” goal,” Mrs. Kagame said.

Roman Tesfaye, the former First Lady of Ethiopia, reiterated the role of women in strengthening food systems, pointing out that they should be given a say if the continent is to sustainably build resilient food systems.
“Women are more concerned about nutrition than anybody else. We are happy that it is now a concern for all in the world, including men and women,” she said, also reiterating the call to boost nutrition.

“If we are dedicated to bringing down the mortality rate of children in Africa, we have to work on nutrition,” Tesfaye said, highlighting some of the initiatives Ethiopia has undertaken and are paying off.
“In Ethiopia, children who participated in school feeding programs reported improved academic performance, gained weight and had reduced incidence of dropping out and absenteeism,” she said.

During the session, the Alliance for Green Revolution in Africa announced the winners of the 2022 Women Agripreneur of the Year Award 2022 (WAYA), who received their accolades from the First Lady and other officials.
Women agripreneurs from the Gambia, Rwanda, Benin and Nigeria who emerged winners received about $85,000 in grant funding in their respective categories, which include ‘Young Female Agripreneur’, ‘Female Ag Tech Innovator’, ‘Outstanding Value Adding Enterprise’, and ‘Overall Grand Prize’.

Oluyemisi Iranloye, from Nigeria, who is the Managing Director, Psaltry International emerged the Overall Grand Award while Uwintwari Liliane, the CEO of Mahwi Tech emerged the Female Ag Tech Innovator.

Célia Chabi, the CEO, KIEL BIEN-ÊTRE, from Benin, took the Outstanding Value Adding Enterprise, which recognizes female-owned agribusinesses that are increasing the economic value and or consumer appeal to agricultural products.

Dr. Agnes Kalibata, president of AGRA congratulated the 2022 WAYA winners, pointing out that each is a remarkable role model to the thousands of women across Africa working to make their mark on African agriculture, and embodies the ambitions of VALUE4Her.
“Although women comprise around 40% of Africa’s rural workforce and contribute up to 70% of food production, their efforts are still significantly under-recognised when it comes to business opportunities and investment,”

“The unique stories of our four winners will help us to inspire and enhance advocacy for female agripreneurs across Africa, to build an environment that supports women to catalyse the needed transformation of Africa’s food systems,” Dr. Kalibata said.
https://www.ktpress.rw/2022/09/agrf-2022-mrs-kagame-makes-case-for-impro...