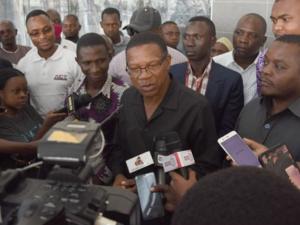 An aide to Tanzanian presidential candidate for Alliance for Change and Transparency (ACT-Wazalendo) is being held by the police for questioning on money laundering allegations.

Jerome Luanda, and aide to Bernard Membe, was arrested on Tuesday at the Julius Nyerere International Airport (JNIA) after arrival from Dubai where he had gone with his boss.

They arrived aboard an Emirates Airlines jet at 2:20pm, and, according to Mr Membe, his aide was taken in for questioning by the police.

“An aide to Bernard Membe was arrested at Dar es Saalam International Airport in broad daylight. He is being held for interrogation over money laundering allegations,” Mr Mambosasa told reporters on Thursday.

Mr Membe had issued an ultimatum that Mr Luanda should be released within 24 hours “without a single bruise”.

SACP Mambosasa said on Thursday that Mr Luanda is being held at an unnamed police station and will be charged for money laundering. He did not say how much money he allegedly laundered or whether he entered with the money from Dubai.

Upon arrival at the Julius Nyerere International Airport in Dar es Salaam on Tuesday afternoon, Mr Membe told journalists that they had been thoroughly searched by immigration officials.

He also allayed speculations that he had fled the country, saying instead he went to attend a key meeting and seek medical care.

“I am aware of the circulating speculations about my whereabouts. However, let me be clear about this, I am a board member of one of the biggest companies in Dubai. Therefore, I usually visit Dubai four times a year,” he said.

“I failed to attend the last two board meetings due to the Covid-19 outbreak. While in Dubai, I also used the opportunity to do a medical checkup. I can declare that I am healthy and ready to continue with the election campaigns.”

The election is scheduled for October 28.

An hour after speaking to journalists, Mr Membe was heard asking about the whereabouts of his aide and then spent nearly an hour inside his vehicle without leaving the airport.

He then disembarked from the vehicle and headed to the arrivals lounge, apparently to find the whereabouts of his aide.

He later told The EastAfrican that Mr Luanda was taken by two men inside the airport.

Earlier, Mr Membe told journalists that he, on arrival, underwent a thorough search. “They searched page after page, cloth after cloth and shoe after shoe but found nothing because we were not born yesterday.”

Money laundering is listed as one of the unbailable offences under Section 148(5) of the Tanzanian Criminal Procedure Act.