All eyes on Magufuli as key dockets await appointees 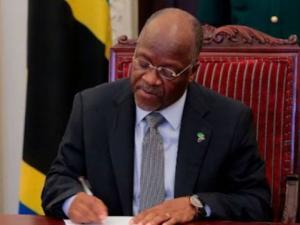 Dar es Salaam. With the clock ticking away fast before President John Magufuli names his full cabinet, Tanzanians are keenly watching to see to whom he will entrust the key sectors of agriculture, industry and trade.

Those who will man the dockets will have to scratch their heads in efforts to meet the expectations of the Head of State in line with what he said when inaugurating the 12th Parliament in Dodoma last week.

With only five years remaining before he completes his two five-year constitutional terms in office, President Magufuli seeks to hasten attracting investments to build the much-hyped industrial economy.

It was along this line of reasoning that he gave a boost to investment promotion initiatives in January last year (2019) when he formed a new Investments ministry under the Prime Minister’s Office (PMO).

But, inaugurating the 12th Parliament last week, Dr Magufuli stated that he wants investment inflows to be faster and more substantial than was the case in his first five-year presidency.

In nthe event, he shifted the docket to the President’s Office.

But understanding that attraction of investments would result in a much-needed boost to the local economy if it is inter-twinned with agriculture, Dr Magufuli outlined his desire to see the country cutting back on imports of products made from cotton, cashews, tea, coffee, tobacco, sisal, cocoa, palm oil, sunflower and sugarcane.

“We are spending Sh1.3 trillion on food imports annually; this is shameful - and it should be the first assignment to the person who will be appointed to oversee the agriculture docket,” he said.

Yesterday, a consultant of the International Fund for Agriculture Development (IFAD), Dr Sizya Lugeye, said IFAD positively received the President’s plans and strategies - although the decision was delayed.

He said the Agricultural Sector Development Programme (ASDP II) launched in 2018 provides everything needed to transform the country’s agriculture. However, the programme was neglected, getting no implementation funds from the government or donors.

“Donors expected to be invited to a conference aimed at mobilize funds for the programme. This didn’t happen. No budgetary allocation has been made since 2013 when ASDP I expired,” he lamented.

Dr Lugeye also said that the new Agriculture minister should carefully analyse the content of ASDP II, and then request funds from the government and donors - if possible funds surpassing the recommendations of the Maputo Declaration by at least two-thirds,” he said.

The Maputo Declaration required member countries of the African Union to set aside at least ten percent of their annual budgets for the agriculture sector.

According to him, Tanzania has suitable land for wheat production, as well as enough expertise and centres of excellence. But, these haven’t been used effectively. After upgrading the Agricultural Sector Development Strategy in May 2016, the country has both an updated programme and strategy. But political will and appropriate skills were needed to turn the strategy into a reality.

With the President is eying the creation of an industrialized economy, those occupying the agriculture and industry dockets - as well as their counterparts in the livestock and fisheries development dockets - must undertake extra responsibilities.

“They will be required to play a coordination role that would see to players in the sectors coming up with small, medium and large scale processing factories so that commodities produced in Tanzania can have the quality and values that will be competitive in the Sadc [Southern African Development Community] and EAC [East African Community] regions,” said the executive secretary of the Agriculture Non-State Actors Forum (Ansaf), Mr Audax Rokonge.

Key on the agenda of those to be appointed, said Mr Rukonge, would be to look for market opportunities across the regional blocs - and make a critical analysis of stakeholders’ preparedness in grabbing the opportunities.

“Priority has to be put on our local companies in such a way that foreign firms must be compelled to be tied to their local counterparts for sustainability and transfer of skills,” he said.

Government regulatory bodies must be strengthened so that they can play a facilitative role.

Dr Lugeye was also of the view that the agriculture sector will make significant improvement through the president’s intervention - and ensure that fertilizer procured under the bulk procurement system is accessed in time, and at affordable prices.

But the International Institute of Tropical Agriculture (IITA) communications officer, Catherine Njuguna, said Tanzania had all the needed resources to support improved agriculture productivity, including arable land, good weather, labour and good policy. All these provide the means of making agriculture the driving force of Tanzania’s economy.

According to her, the private sector, as well as the presence of many development partners and the Tanzania Research Institute (Tari), are factors that could bring about agricultural prosperity for the country.

“A conducive environment should be created for the agriculture minister to deliver - including the provision of enough resources; increasing budgetary allocations, strengthening partnership with the private sector and relevant research institutions,” she said.

She said IITA would support the government’s efforts through sharing and scaling-up of research outcomes in order to address the challenges facing agriculture - including climate change and commercialization of the sector in order to increase its profitability and income generation.