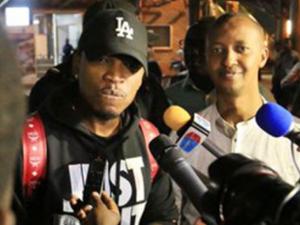 He will be performing live alongside US-based Rwandan singer Meddy Ngabo, who jetted in the country a few days ago, Bruce Melody, Charly na Nina and Riderman.

Organised by Rwanda Development Board (RDB), the concert will follow the Conservation Celebratory Dinner dubbed ‘Kwita Izina Igitaramo’ which will be held in the evening of the same day at Kigali Convention Centre as part of the fundraising campaign to support mountain gorilla conservation.

This will be Ne-Yo’s first ever performance in Rwanda and the third in two years for Meddy who last performed in Kigali in January this year at the East African Party.

“I don’t think I have been in Rwanda before but I just expect to have a great time here and meet great people,” He told journalists at Kigali International Airport.

Ahead of his performance, the singer said, “Everybody has seen me performing and can be amazing. That is what I always do. You can see me singing and dancing which I always do. Just [come and] see what I am going to give you”

The duo’s performance will be a day after the annual gorilla naming ceremony slated for September 6 in Kinigi, Musanze during which 25 infant mountain gorillas will be named.

The Miss Independent hit maker is arguably one of the best RnB singers of his days the United States has ever celebrated thanks to songs like So Sick, Because of You, Same, One in A Million and In My Own Words, the cover song of his debut album which topped the Billboard200 chart in 2006.

The Kwita Izina Gala Dinner is a popular event on the Rwandan social calendar and has been growing stronger over the years, attracting visitors and entertainers from across the continent and globally.

According to RDB Head of Communications and Marketing, Sunny Ntayombya, over Rwf40 million was raised through ticket sales as well as an auction during last year’s Kwita Izina Gala Dinner, headlined by South African duo Mafikizolo at the Rubavu Serena Hotel, up from Rwf 36 million raised from the same conservation event in 2016.