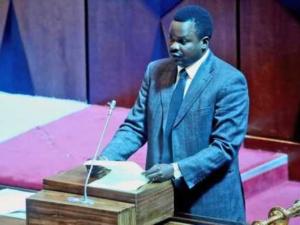 Rights lobby Amnesty International on Monday appealed to the Kenyan government not to deport Tanzania’s ex-legislator Godbless Lema, to save him from “persecution.”

The rights watchdog said Nairobi has a legal obligation to host anyone fleeing danger from their countries and that Mr Lema’s situation means he would be at risk if forcibly returned to his country.

“Kenya must not violate the internationally recognised principle of non-refoulement,” Irungu Houghton, the Amnesty International Kenya Director, said on Monday.

“The international principle is upheld by own national laws. It prohibits Kenya from turning away people at the border or returning them to a country where they would be at risk of persecution or danger.”

Mr Lema, a former MP for Arusha Urban Constituency in Tanzania, was arrested on Sunday after crossing into Kenya, in Kajiado County about 80 kilometres south of Nairobi. He ran for reelection on a Chadema ticket and lost his seat in the recently concluded General Election.

His lawyer George Wajackoyah said on Sunday the politician will seek asylum in Kenya.

“I have handed him over to the Kenyan police for processing. He is ready to die in a Kenyan jail than by the Tanzanian police who are still pursuing him as we speak,” said prof Wajackoyah in an interview with the Nation, even as he expressed fears of possible deportation of the politician

Kenya Police say he entered the country illegally, which means he could be deported. The ex-lawmaker, however, told reporters on Monday that his life had been threatened by unknown government operatives in Tanzania.

“I could not ignore the threats. I realised that unknown people were trailing me. That is why I decided to leave my country,” he said. His family had already arrived in Nairobi and was applying for asylum, he said.

Kenya is a signatory to various international protocols on refugees and asylum seekers which forbid deportation of those fleeing danger back home. Sometimes asylum seekers, owing to the nature of danger, may arrive in the country illegally. But government officials often insist on registration and application for their status as refugees or asylum seekers.