AU, EAC call for ceasefire in war between DRC army and M23 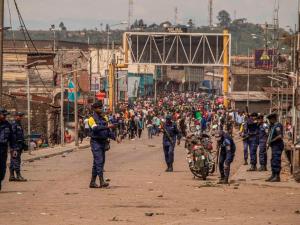 The African Union (AU) and the East African community (EAC) have called on the parties in the conflict between between the Congolese army (FARDC) and rebel group M23 to begin a ceasefire in order to enable a peaceful solution to the ongoing war.

The call came on Monday, a day after the Democratic Republic of Congo expelled Rwandan ambassador Vincent Karega.

In a statement, Senegalese President Macky Sall, who is the AU chairperson, together with AU Commission chairperson Moussa Faki Mahamat, expressed their deep concern about the deteriorating security situation in the eastern part of the DR Congo, and urged "all stakeholders to engage in a constructive dialogue. This, they said, should be within the framework of the existing African Union peace, security and cooperation framework for the DRC and the region, and the East African Community Inter-Congolese Peace Dialogue.

The whole region is particularly concerned about the escalating violence that is trapping civilians. The war has intensified and the rebels have taken over two villages — Kiwanja and Rutshuru centre in North Kivu — in addition to Bunagana.

Former Kenyan President Uhuru Kenyatta, the AU-Kenya peace envoy and facilitator of the EAC-led Nairobi process, called on "all parties to recognise that there is no military solution to the conflict and embrace a peaceful means to the settlement".

Although DRC and Rwanda diplomatic relations are breaking down, both countries said they are fully committed to the Luanda process, where they had already begun negotiations in search for peace, under the aegis of Angolan President João Lourenço, who had been mandated by the African Union to spearhead the process.

Find a peaceful solution
On Sunday, the Angolan leader sent an emissary to DRC President Félix Tshisekedi to discuss the situation in eastern Congo. The Angolan Minister of External Relations Tete Antonio brought Lourenço’s message to President Tshisekedi that his Angolan counterpart intends "to continue his efforts to find a peaceful solution to the dispute between Kinshasa and Kigali through the application of the Luanda roadmap established in July 2022", the communication office of the Congolese head of state reported.

The heads of state in the sub-region are clear have insisted on the need to resume negotiations within the framework of the ICGLR, the Nairobi process and the Luanda process.

With regard to the Nairobi process, the stakeholders, namely the Congolese state and various armed groups, are due to meet in the Kenyan capital for the third round of the Inter-Congolese Peace Dialogue.
The third session, which was initially slated for November 7-14, 2022 has been rescheduled for November 21-27, 2022 in Nairobi.