Belgium Apologizes To Congo,Burundi and Rwanda For Colonization and Kidnapping of Mixed-Raced Children 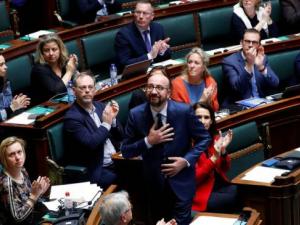 It’s no secret that colonization has introduced unspeakable horrors to communities of color throughout the world. And while an apology could never remedy those atrocities, it can serve as the impetus for long overdue healing and accountability.

On Thursday, the New York Times reported that Belgium Prime Minister Charles Michel began the process of doing exactly that in front of a plenary session of Parliament, making it the first time the country acknowledged its grievous history against African nations.

“Throughout Belgian colonial Africa, a system of targeted segregation of métis and their families was maintained by the Belgian state and acts were committed that violated the fundamental rights of peoples,” he said. “Métis” denotes a term used for people of mixed-race.

“This is why, in the name of the federal government, I recognize the targeted segregation of which métis people were victims” under Belgian colonial rule in Africa, and “the ensuing policy of forced kidnapping” after independence, he continued.

The prime minister announced plans to make resources available to finance additional research on the matter, as well as open up its colonial archives to métis people and offer administrative assistance to those seeking to gain access to their official records in order to attain Belgian nationality.

With the growing African diaspora exploring colonial history and addressing the racism and discrimination that permeates European society, politicians across Europe are beginning to feel the heat. As such, Belgium has spent the past year taking the steps it believes are necessary to atone for an atrocious past in which it colonized Burundi, Congo and Rwanda for eight decades.

From the New York Times:

Racial segregation was a pillar of Belgian colonial rule, historians say. Until the late 1950s, the colonial authorities discouraged interracial romance and banned interracial marriage before the Catholic Church.

Fearing a repeat of the Red River Rebellion in Canada in 1869-1870, when métis people revolted and overthrew the local government, the Belgian authorities ordered métis children in Congo to be separated from their families, and from the black population as a whole.

An estimated 10,000 to 20,000 children were segregated from their parents — most often from single African mothers — and placed in orphanages and schools predominantly run by the Catholic Church, historians said.

“Children born out of parents of mixed color during colonial times were always considered as a threat to the colonial enterprise, to profits and to the prestige and the domination of the white race,” said Assumani Budagwa, 65, a Belgian engineer and amateur historian who was born in colonial Congo and whose family experienced the separation of mixed-race children.

In 2017, the Catholic Church apologized for its “participation” in the kidnapping and segregation of métis children, as well as it’s ban of mixed-race marriages.

In a letter, the Belgian bishops stated: “Many never knew their mother or their father, and many mothers never saw their children again. For a long time, they couldn’t fully exercise their civic rights, and a large number later found itself on the margins of Belgian society in insecurity and hardship.”The letter said, “We present our apologies to those people for the part taken by the Catholic Church in these deeds.”

But while Belgium believes an apology is a step in the right direction, J.C. Karerwa Ndenzako, a spokesperson for the Burundian president, believes that’s just the tip of the iceberg.

“Excellency Prime Minister @CharlesMichel, apologizing over children snatched from their African mothers is not enough,” he tweeted on Wednesday. “The vileness of these acts is part and parcel of a far broader history. #Belgium should dialogue with #Burundi, #Rwanda & #DRC”

Upon learning of Michel’s apology, Georges Kamanayo, one of the children who was taken to Belgium, called it the “ultimate recognition of an injustice”.

“We have felt like third-rate Belgians for a long time,” he told De Standaard.