Belgium hands over sounds and songs recorded during colonial period 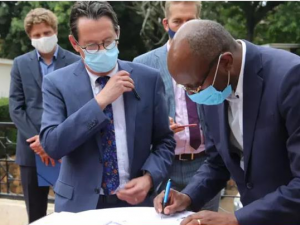 On Thursday, October 28, the Rwanda Cultural Heritage Academy received more than 4,000 sounds and songs from Belgian project, “SHARE”. These archives were conserved by the Royal Museum of Central Africa.

It is a set of sounds and songs recorded during the colonial period, taken between the 1950s and 2000’s.

During the ceremony which took place at Rwanda Art Museum, Belgium envoy to Rwanda Benoir Ryelandt handed over the disk that holds all the sounds and songs to Director General of Rwanda Cultural Heritage Robert Masozera.

The disc contains elements which were restituted to RCHA director-general, accompanied with a detailed inventory highlighting titles of sounds and songs, detailing the place of recording and the ritual function of these documents.

This restitution comes as a result of discussions held during an international conference organized by the Rwandan Government in 2018. Since then, Belgium has shown good will to return Rwandan heritage so far held in Belgium.

According to ambassador Benior Ryelandt, the handover shows how both countries built ties, and that this will not end with sounds and songs, but also other creative arts left in Belgium that were taken during the colonial period.

“The project's name says it all. Sharing means having a bond together, that’s why our country decided to deliver what belongs to Rwanda.”

In addition, he thanked Rwanda Cultural Heritage Academy for continued collaboration in mobilising archives and bringing them back, promising that even the ones left will soon be handed over to Rwanda.

The ambassador added that Rwandan music is rising at a good pace, and believes that these sounds will help Rwandan musicians, by giving them ideas and introduction to the origins of their traditional music.

Masozera said that the sounds and songs belong to all Rwandans and that the songs delivered will be put on all social media platform to help Rwandan citizens all over the world access them.

“This part of Rwandan Heritage will be archived and accessible to the public at the Ethnographic Museum of Huye District. From there, we will post them on all social media platforms so that even Rwandans outside the country can access them,” he said.

He disclosed that these sounds will also benefit both history and music students, who will be able to learn practically what they see and understand more about ancient Rwanda.

Rwanda is also in discussions with Belgium and Germany to see whether other pieces of art that were taken during the colonial period, can be returned to Rwanda, according to Musozera.

Singer Michael Makemba, who performed at the event, welcomed the sounds and songs and talked about how this act was a necessity for Rwanda’s music industry.

“Each country in Africa is developing its own style from their traditional sounds. For us, to produce a unique sound, we need samples from the origin of Rwandan music,” said Makemba.

“This disc will give us a clear image of our traditional music, so that we can develop ideas from them and create our own style, different from other sounds,” he added.

Makemba is one of the few traditional musicians in Rwanda that have managed to pioneer his own style dubbed Gakondo Fusion, which is a mixture of traditional and modern sounds.

Its aim is to share heritage and build capacity in conservation and collection management with museums and research institutes.