Bidding Farewell to 2019, the Year of Judicial Triumph 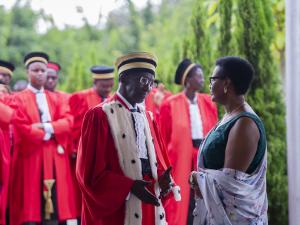 The year 2019 will be written in memories of Rwandans as a year when a breakthrough was made in discovering and giving a decent burial to remains of genocide victims that were stashed in the community but with no clues of the mass graves in the midst of the community.

As Rwanda prepared to commemorate the 25 years of the genocide against the Tutsi, Rwandans laid to rest remains of genocide victims that were retrieved from various areas in the capital Kigali.

At a moment filled with emotions at Nyanza genocide memorial site, a total of 84,435 bodies of genocide victims were laid to rest in May 2019.

This adds to more victims in addition to more than a million killed during the genocide, most of whom are said to be still missing or undiscovered.

The National Commission for the Fight against Genocide (CNLG) plans in the financial year 2020-2021, on using state of the art technology to unearth other Genocide remains and mass graves, as a way of giving decent burial to the victims.

Dr. Jean Damascene Bizimana, the CNLG Executive Secretary says that they plan to buy at least two machines each estimated at Rwf200 million which can identify the remains underneath the earth surface.

“The technology is similar to that used to identify victims of the holocaust of the Jews more than 75 years later,” Bizimana said.

President Paul Kagame also appointed Dr. Faustin Nteziryayo who was named the new Chief Justice on December 4, replacing Professor Sam Rugege who went into retirement after serving in the position since 2011.

Similarly Jean Bosco Mutangana was dropped as the Prosecutor General alongside his deputy Agnes Mukagashugi- who was replaced by Aimable Havugiyaremye and Angelique Habyarimana respectively.

President Paul Kagame commended the outgoing Chief Justice and President of the Supreme Court Prof. Sam Rugege and his Deputy Zainabu Sylvie Kayitesi who completed their mandate serving the country with integrity.

Kagame had said in November during the launch of 2019-2020 Judicial Year that Rwanda’s judicial sector has undergone key reforms over the last 15 years, which have resulted into citizens having trust in the justice system, but challenged the sector to deal with the remaining challenges, including reported corruption in the judiciary.

Rwanda will also end this year saying Bye- Bye Judge Theodor Meron, former President of the International Criminal Tribunal who was known for failing to bring justice to genocide suspects in his hands.

Meron either freed reduced sentences or acquitted more than a dozen people – all of among those who planned and executed the 1994 Genocide against Tutsi.

Meron was this year replaced with Judge Carmel Agius who during his visit in Kigali in April, said- No easy early release of Genocide convicts will happen under his time.

Agius said that the International Residual Mechanism for Criminal Tribunals (UNIRMCT) has requested extra funding to support Rwanda in tracking down and investigating fugitives.

In his visit to Rwanda, in June the Chief Prosecutor of the United Nations’ International Residual Mechanism for Criminal Tribunals (ITMCT), Dr. Serge Brammertz, also promised more support from the UN Residual Mechanism and renewed a firm commitment to track Genocide fugitives.

Figures show that half of the nearly 1,000 fugitives indicted by Rwanda over genocide crimes, live in neighboring countries and sub-Saharan Africa.

DR Congo and Uganda top the list of countries that harbor most indicted Genocide fugitives with 254 people and 226 people, respectively. France and Malawi have 42 respectively while Belgium is safe heaven to 39 fugitives.

Both Brammertz and Agius commended Rwanda for its improved justice system which offers genocide suspects defense lawyers at no cost and uses of technology inside the court settings which enables follow up of cases sent to Rwanda.

This treatment was tasted by some of the suspects in a case involving 25 Rwanda National Congress (RNC) suspected for joining armed forces against Rwanda.

One of them is their Commander Retired Major Habib Mudathiru who suffered an injured leg during his arrest and before court appearance was given proper treatment, including RDF soldiers having to carry him to and from the court each time.

Using technology like electronic case filing systems in Rwanda’s justice system was this year made better with introduction of an online technology to apply and get criminal record certificate within minutes.

In September, the Electronic Criminal Record Certificate service was added on a long list of over 90 government services that are delivered online, through Irembo online platform.

The prosecution said they have fully shifted from the manual to this digital service but it has been long awaited service that will reduce the number of people queuing for the service.

The service doesn’t exclude anyone applying for it, whether their criminal record is tainted or not. Rwandans living outside they will be required to apply for the certificate through their respective embassies.

Rwandans file a case against Uganda

On the regional level, 12 Rwandans who say they were illegally detained in Uganda filed in June, a landmark case in the East African Court of Justice (EACJ) against the government of Uganda seeking justice for the damages caused during their time of detention in Ugandans cells.

Also, EACJ dismissed a petition by Burundi government that challenged the December 2017 election of Rwanda’s Martin Ngoga as Speaker of the East African Legislative Assembly (EALA).

This year will also be closed at a good note as Rwanda welcomed the decision by a Belgian Court to sentence to life in the genocide case of Fabien Neretse- who become the first person to be convicted in Belgium on charges of genocide and war crimes in the 1994 Genocide against the Tutsi.