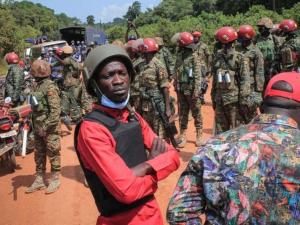 Ugandan opposition leader Bobi Wine said Thursday he would call on the International Criminal Court to probe murder, torture and other abuses in the country, which is bracing for a tense presidential election next week.

The pop star-turned-politician is the main rival to veteran President Yoweri Museveni, 76, in the January 14 election, which will take place after a chaotic and violent campaign during which Wine has been arrested multiple times.

The 38-year-old, whose real name is Robert Kyagulanyi, said his complaint would target Museveni and nine senior security officials accused of targeting Wine, his supporters and civil society activists.

"I hope that the International Criminal Court can call (Museveni) to order and remind him that he is also a human being," Wine told journalists during a dramatic conference call which was disrupted when a police officer hauled him out of his vehicle through the window accusing him of being illegally parked.

Wine, dressed in his campaign trail outfit of a bulletproof vest and helmet, struggled to finish as he was choked by teargas fired near his car.

According to Wine's lawyer for the case, Bruce Afran, there is little international precedent for the case because the complainants hope to use ten samples of alleged offences stretching over a decade to prove "systemic" violations of international law based on a "history of torture and physical abuse" by the State.

The complaint details chilling instances of torture including that of an activist allegedly placed in a tank of freezing water with a hot metal plate above his head, who was also later forced to watch another detainee have his eye gouged out.

The same activist also was targeted with venom sprayed from a number of cobras concealed in a basket, and was shown a pile of about ten bodies, according to the complaint.

Other allegations include torture faced by Wine himself and the use of a deliberate "shoot to kill" policy by security forces accused of killing at least 54 people in November last year during protests against one of Wine's arrests.

The ICC has no obligation to consider complaints filed to the prosecutor, who can decide independently what cases to submit to judges at the court, set up in 2002 to achieve justice for the world's worst crimes.

The ICC last month threw out a complaint over the killing of some 150 people by Ugandan police in November 2016 in the western Kasese region, saying it did not meet the threshold for crimes against humanity.

Nevertheless, Wine used the announcement of the latest complaint to call upon the international community to do more to protect Ugandans from state violence.

"The international community has not done enough to help the people of Uganda," he said.