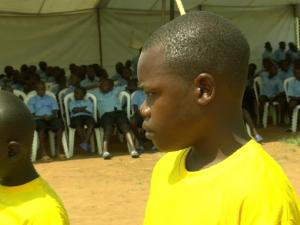 Rehabilitation or transit centers are spread across different parts of Rwanda. As per official narrative, transit centers is where delinquent youths are held for a few days, before being transferred to rehabilitation center to be reformed and given a new lease of life. However, over the years, the testimonies of people returning from there paint a mixed picture. We have traced some;

Bamfakuvuga Abdoul Kalim, a father of three lives in Kabenga cell, Mayange sector, Bugesera district. In 2015, he owned a company “Best Transportation Company Services Ltd” which was operating 378 bicycle riders, known in Rwanda as abanyonzi. It had offices in Kanombe sector, Kicukiro district in Kigali.

“In 2018, Kanombe sector got a new executive secretary, Higiro Emmanuel and that is when my problems started. He demanded to have a stake in my company. He bought ten bicycles and demanded I include them so that he can get regular income, which I refused.”

“One day, my cyclists and the bicycles were rounded up and taken to the Kanombe sector offices. When I went there to reclaim them, the executive secretary Higiro was furious with me even saying ‘Ako gahungu mwakajyanye kwa Kabuga‘.” (EDITOR: “Kwa Kabuga” is notorious facility where delinquents are held, officially called the Gikondo Transit Center)

“One day, we found my offices had been broken into with all bicycles missing. Despite seeking redress from Kicukiro district, I got no help to recover my bicycles and that was end of my business.”

“On June 6, 2019, I had gone to visit a family member in Kanombe. I was mysteriously arrested on allegation that I transport cannabis from Bugesera to Kigali. I was taken to Kabuga transit center where I was put in a hall called YUWAYI, which is where drug dealers and users are held. People in this hall are banned from recieving visitors.”

“I pleaded several times to be taken to court but all that fell on deaf ears. I was innocent and a court would have freed me because I didn’t do any of what was framed against me. No member of my family was allowed to see me.”

“On June 18, I was transferred to Nyamagabe rehabilitation center in Nyamagabe district, southern province. I wouldn’t wish anyone to ever be in that place because of what I saw and experienced there. You are tortured, starved and constantly called ‘umwanzi w’igihugu‘ (enemy of the state).”

“There were over 1,500 people in the facility. We had porridge in the morning and 500g of cooked maize at 14hrs. Some days later, we were getting 700g eaten twice daily. Fellow inmates were the ones in charge. The employees usually watched. You could be singled out at any time for 100 lashes. It was like a game!”

“It was after three months that my family was notified about my whereabouts. It is said rehabilitation centers are for teenagers, which is far from the truth. Where I was, 48 people were over 40 years. There was even a 55year-old man. They lied to our families that we were doing vocational trainings, which are supposed to be practical training. Yet, we only spent a month sitting in a hall learning theories of how to create our own jobs.”

Bamfakuvuga Abdoul Kalim was released June 25, 2020, after spending a year there. In total, 1,389 people were freed on that day. He said: “I plead with the leadership of this country to put in place competent mechanisms that decide who goes to these rehabilitation centers. Otherwise, officials are misusing them to settle scores against ordinary people.”

“I was working at Agaseke Bank in Kigali as a cleaner. One evening, as I was moving to a shop, a Police patrol rounded me and others. I had not carried my ID. We were taken to “KWA KABUGA” (referring to the notorious transit facility in Kigali)

After four (4) months, I was transferred to Nyamagabe rehabilitation center and that is when my family found out where I was. Right from the day I was picked up, I pleaded to be allowed to explain that I was not a delinquent and that I had a job. They never wanted to hear anything. It hurts me so much for living through all those lashes and injustice yet I was innocent.”

In Nyarugenge district, here in Kigali, The Chronicles met a mother who confessed to bribing officials so that her son is taken to Iwawa Rehabilitation Center, located on Lake Kivu.

She narrated: “My son had become so unruly. He had been performing very poorly in school and had actually dropped out. I had been hearing information that children can be rehabilitated from Iwawa, from where they return as useful people to society. I was told children who come back from Iwawa are disciplined.”

“I contacted an official who was known to me about the requirements for Iwawa. I cannot tell you how much I paid different people for my son to be taken to Iwawa. What you should know is that he was not taken as a result of links to cannabis or drinking alcohol. Not at all! He was just indisciplined. I made the decision to send him to Iwawa to be reformed.”

On June 2, at 9am, DASSO security personnel arrived at the home of Ingabire Marie Goretti. They claimed to be conducting operation for smuggled second-hand clothes.

She narrated: “I was taken to Ngoma sector office where I found other people arrested from the operation. The clothes found in my house had receipts but they refused to accept my explanation. I was photographed and detained in Ngera police station.”

“The following day my husband Hakizimana Oscar returned from Kigali and came to see me. Immediately he arrived, I was freed and my husband was detained. I sought for explanations from different levels to no avail. He was transferred to Nyaruguru delinquent transit center.”My husband has been there ever since. They only tell me he is a smuggler. The executive secretary for Ngoma sector Hakizimana Jean did attempted to block us from constructing a house but we couldn’t stop because we had all documents. From that point onwards, the official had been looking for a way to punish my husband. All officials who have spoken to me anonymously, confirmed it.”

When contacted, the executive secretary Ngoma sector, denied the allegation against him, saying the Hakizimana Oscar is a known smuggler. He however, couldn’t explain why the suspect had been taken to center for juvenile delinquents, instead of being prosecuted by competent instances.

EDITOR: The suspect and executive secretary share the name Hakizimana. They are not related.

On June 18, the lifeless body of Giraneza Theogene was found not far from Tongati transit center located in Murundi sector, Karongi district, Western Province. It was later confirmed he had been released by the facility to return home as he was in poor health.

It remains unclear as to what caused death of the victim. However, since then, local media has been running reports of people who were held at that transit center. They claim to be sleeping on the floor without any coverings, leading to many contracting pneumonia. As a result of the poor conditions there, people held there had developed other complications. Unconfirmed reports also say since 2018, at least 3 people have died after leaving this facility.

In Bitare village, Taba cell, Rusiga sector, Rulindo district, northern province, we found a family involved in a bitter fight over land. As a result, a father had schemed against his son Uwireba Patrice, who was rounded up and taken to a transit center.

In the midst of the conflict is his sister Izere Jeanette. She has been trying to plead for his case, but the family has not been able to locate him at the transit center. They were not told of his whereabouts. According to Izere, their father accused the son Uwireba of trying to grab his property.

Izere says she petitioned Rulindo district mayor Kayiranga Emmenuel, who promised to engage other local officials to help solve the issue. So far, no action has been taken. She also claims it was their father who was misusing family property and even bribed village officials to have the son removed from the area, reason he was arrested.

The Iwawa Rehabilitation Center (IRC), located on Lake Kivu, shared between Rwanda and DR Congo, is the biggest and most famous facility. Thousands have graduated from there and are engaged in various gainful economic activities, from being street kids and beggars.

Government spends Rwf 70 million monthly and hundreds of millions annually on this facility alone. According to official data, from 2011 to September 2019, a total of 21,614 people have been rehabilitated and provided with TVET skills at Iwawa Rehabilitation Centre. Official reports also admit that 10% of them have relapsed, and ended back at the facility for “second training”.

Other similar centers are:

When The Chronicles sought interview ACP Gumira Rwampunga Gilbert, deputy director of the National Rehabilitation Service which oversees all the above facilities, he said he only accepts face to face interviews. “How can I be sure you are the journalist you claim to be. You are welcome to my office,” he said.