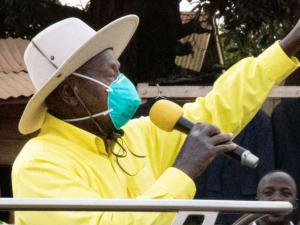 At a recent meeting with the US ambassador to Kampala Natalie Brown at his ranch in western Uganda, President Yoweri Museveni laid on a thick layer of cattle diplomacy; a woman as tall and elegant as the envoy would command about 21 cows in bride price, he said.

In the fortnight after his controversial re-election, President Museveni has been milking his engagements with the diplomatic corps through a series of bilateral meetings to gauge the attitude of allies and the intentions of critics, diplomatic sources have confirmed to The EastAfrican.

This week the Electoral Commission published final results confirming Mr Museveni’s re-election for a sixth term in office with 58 per cent of the vote. However, main rival Robert Kyagulanyi Sentamu aka Bobi Wine, who officially received 35 per cent of the vote, has rejected the result as fraudulent.

There has also been widespread criticism over campaign violence that left more than 60 people killed, allegations of electoral fraud, and an environment of intimidation. The refusal to accredit many election observers, arrests of opposition supporters and polling agents and an internet blackout also cast a shadow over the transparency of the process.

By press time on Friday Bobi Wine’s National Unity Platform was still taking legal advice on the viability of challenging the election result in the Supreme Court. The opposition candidate was placed under house arrest soon after casting his ballot and was released after 12 days following heavy diplomatic pressure on the government.

Calls to hold a national dialogue to defuse tension and address public discontent in Uganda have been growing, including from the opposition, elders, religious leaders and pro-democracy activists. In his first speech after being declared winner President Museveni opened the door to some form of dialogue, but his hand has been strengthened by the passage of time and his assessment of bilateral views from some of the diplomats he has met, sources told The EastAfrican.

“Essentially what has happened is a series of one-on-one talks in which Mr Museveni has assessed how strongly each partner feels about the situation and what leverage they might have against him,” a diplomatic source who asked not to be named in order to speak freely, said. “It’s the old method of chalking up who is with me and who is against me, then determining which course of action to take.”

Mr Museveni is understood to have met or spoken to diplomats from most major partner states, including the United States and the United Kingdom. After receiving congratulatory messages from Russia, China and key member states from the East African Community, the incumbent believes his hand is growing stronger with each passing day, State House sources said.

On Tuesday, during festivities to mark 35 years since he took power after a five-year guerilla war, President Museveni said he was open to reconciliation with political rivals, noting that former President Idi Amin Dada’s son, Taban, works in his government as an intelligence officer.

A day later, however, Mr Museveni pushed back against calls for dialogue with the opposition.

“Imagine some people have been coming here that they want to mediate between me and the Opposition,” he said at a public event in Kampala.

“Mediate what? I do not want any mediation. Everybody knows my address; I know the address of these Opposition people. I can drive there and we talk. We do not need any mediation. It’s an insult to tell me mediation.”

Sources familiar with the processes said while the incumbent has not closed the door to reconciling with rivals, he is keen to ensure that it happens on his terms and believes he can win over enough diplomatic support.

There are essentially five diplomatic groupings to be managed, according to internal assessments by officials close to the presidency. The first, within the region and the African Union is unlikely to be outspoken while the second – China, and to a lesser extent Russia – generally have a policy of non-interference.

This leaves the US, the United Kingdom, and the European Union. The British High Commissioner to Uganda, Kate Airey met both Mr Museveni and Mr Kyagulanyi in recent days and drew criticism for a statement that opposition officials said was too soft on the government.

Britain’s Minister for Africa, James Duddridge, who on Sunday said his country “welcomes the relatively calm passing of elections in Uganda”, was accused of whitewashing the result. A UK-based investigative outfit found that he worked until recently for a company with investments and connections to politically-exposed persons in Uganda.

The strongest criticism has come from the United States with the State Department noting it was “deeply troubled” and “gravely concerned” by the election violence in Uganda. Officials in Kampala are watching the new Biden administration closely while preparing for the possibility of travel bans and cuts in development assistance.

“The US gives about a billion dollars a year, of which about 30 per cent goes back as consultancies,” said a Finance Ministry official familiar with the discussions, but who asked not to be named because they are not authorised to speak for the institution. “We have run scenarios that show that if we cut out wasteful expenditure, we can survive without them. It would hurt, but it would not kill us.”

With a heavy military presence still visible on the streets and many opposition officials close to Bobi Wine still in custody on unclear charges, officials are betting on self-interest among allies and pragmatism at home to return normalcy to the country.

A delegation from Saudi Arabia is expected soon while an announcement from French oil company Total on its final investment decision in the country’s oil and gas sector is not far off. “Eventually people will want to get back to work,” the Finance Ministry official said.

Henry Mugizi, who runs the Alliance for Campaign Finance Monitoring, a civil society organisation, says dialogue between the government and opposition should address the shrinking political space in Uganda.

“Elections in Uganda have always triggered campaign violence, which has been escalating since 2001 to-date therefore the future of a peaceful Uganda cannot lie in elections. The future of Uganda lies in national dialogue,” he said.

The prospect of a national dialogue might well depend on the outcome of the quiet dialogue between the incumbent and diplomats – and at that moment that is likely to continue until the cows come home.