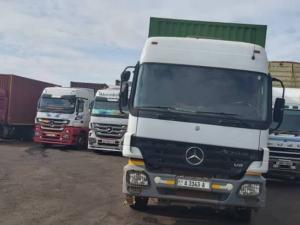 The government of Burundi has blocked entry of cargo trucks from different East African Community (EAC) countries transiting through Rwanda, a situation which started last week, according to reports from several border posts.

The latest blockade is likely to hurt cargo owners who are already challenged by the global epidemic of coronavirus, the COVID-19.

Reports show there are nearly 15 trucks that were cleared by both Rwanda and Burundi Immigration and customs officials (under the One Stop Border Post), but remain in the no-man’s land of different border posts with Rwanda, as of March 30.

Efforts by truck drivers and merchandise owners to negotiate with Burundian authorities to process the cargo through to Burundi, have remained futile.

The trucks are mainly transporting Burundi-bound cargo transiting through Rwanda from the Kenyan port of Mombasa.

At Nemba One Stop Border Post in Bugesera District, three freight trucks have failed to get clearance to take their goods, while at Ruhwa border post in Rusizi, two cargo tracks have been barred entry since Friday last week.

This follows a decision by Burundi Immigration to close its borders with Rwanda.

At Akanyaru-Haut, two trucks are said to be stranded at the border on Rwandan side, as cargo owners try to negotiate with Burundian authorities for entry, according to available information.

As a consequence some eight EAC trucks have been parked at the no man’s land at Mirama Hills border post with Uganda in Nyagatare District, since March 29.

This, according to officials, is because of the uncertainty of their being cleared by Burundi after transiting through Rwanda.

The decision by Burundi to bar the cargo trucks is contrary to the resolutions made by ministers in charge of health and EAC affairs, which among other things, resolved to fight the coronavirus outbreak and facilitate continuity of business in the region.

Burundi’s Minister of Public Health and Fight against HIV/AIDS, and Minister in the office of the President responsible for EAC Affairs, were part of the virtual meeting which took place on March 25.

Ministers resolved to facilitate free movement of goods and services in the region, according to the joint statement released after the meeting that was held virtually.

They also directed all partner states to ensure that trucks and vehicles carrying goods have a maximum of three crew members per vehicle to facilitate smooth border crossing in the region.

In a related development, by the time we went to press, there was a family of six Burundians that was stranded at Akanyaru border, after Burundians refused them entry from Rwanda where they were hospitalized.

This family includes a mother and her child who had been undergoing cancer treatment in Butaro Hospital in Rwanda.

Rwanda Immigration officials at Akanyaru border explained that the family which exited on Saturday 29 March 2020, and was denied entry in Burundi, remaining stranded at the no man’s land without food or shelter.