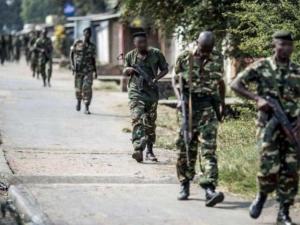 Burundi has become the first country to deploy troops in the Democratic Republic of Congo as part the recent decision by the East African Community for a joint mission against rebels.

A contingent of the Burundian army officially entered Congolese soil on Monday 15 August. And, according to the Armed Forces of the Democratic Republic of Congo (FARDC), these soldiers will be deployed in the operational zone in the south of the province of South Kivu, in eastern DRC, to hunt down armed groups.

The Congolese army specified that this is within the framework of the joint forces, recently agreed on by the heads of state of the East African Community under the then chairmanship of Kenyan President Uhuru Kenyatta.

Until Monday, neither the troop contributors nor the actual timelines had been unknown.

The Burundian soldiers will be stationed at the Luberezi training centre, about 100km from Bukavu, the largest city in South Kivu.

In this area, coalitions of Mai-Mai armed groups on the one hand, and Twirwaneho and Gumino armed groups on the other, are fighting and carrying out a series of reprisals, killing civilians and looting livestock. There are also Burundian groups such as RED-Tabara that fight the power in Burundi from the DRC.