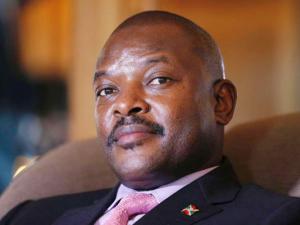 The order, signed late Tuesday, targets dozens of government critics accused of spearheading a failed challenge against Nkurunziza in May 2015, when he announced he would run for a controversial third term.

The property and assets belonging to 32 opposition leaders and journalists in exile, and nine jailed military officers, should be "exploited by the state", said the order co-signed by the Supreme Court chief justice and attorney general.

In the statement late on Wednesday, Prosecutor General Sylvestre Nyandwi said he had informed the registrar of land titles that buildings belonging to people on the list must be seized.

Government critics said the ruling made a mockery of Burundi's judiciary and underscored the ongoing persecution meted out against the beleaguered political opposition.

"Pierre Nkurunziza and his henchmen continue the persecution of opponents of the 3rd mandate by seizing their property... a decision which once again ridicules the Burundian justice system," Vital Nshimirimana, one of the exiled opposition figures targeted in the order, wrote on Twitter.

Burundi exploded into violence when Nkurunziza announced his candidacy in April 2015. He was re-elected in July of that year.

The chaos that followed left at least 1,200 people dead, according to estimates by the International Criminal Court which has opened an investigation.

More than 400,000 people fled the country, including journalists critical of the government and civil society activists.

In May 2016, the Supreme Court sentenced 21 army officers allegedly involved in the failed coup against Nkurunziza to life in prison. A few months earlier, 17 other officers were jailed for five to 30 years over their role in the alleged plot.

The main opposition party says dozens of its activists have been arrested this year alone in a "manhunt" that has seen their meetings shutdown and leaders harassed.

Burundi's independent media were among the most flourishing in the region until the 2015 crisis, when several radio and television stations were destroyed and about 100 journalists forced into exile.