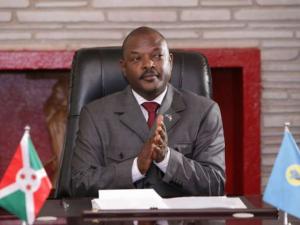 Catholic bishops in Burundi came under fire from authorities for "spitting venomous hatred" over a message read out in churches denouncing intolerance and political violence in the run-up to elections next year.

The message issued by the Conference of Catholic Bishops of Burundi and read out in churches on Sunday expressed their "concern" eight months before the May 20 presidential election, which comes five years after President Pierre Nkurunziza's bid for a third term plunged the country into crisis.

In the letter, seen by AFP news agency, the bishops raised the alarm over efforts to "suffocate and assault certain political parties and to persecute their members".

"Criminal acts go as far as murders with political motives ... perpetuated against those with different opinions of the government," it said.

They also said the ruling party's youth league - the feared Imbonerakure that the United Nations has accused of committing atrocities - had "taken the place of security forces".

Presidential spokesman Willy Nyamitwe lashed out at the bishops on Twitter after the message was leaked on social media before church services.

"Some bishops should be defrocked because it is becoming a habit: on the eve of elections they spit their venomous hatred through incendiary messages", he wrote on Sunday.

The secretary-general of the ruling CNDD-FDD Evariste Ndayishimiye, meanwhile, accused the bishops of "sowing division".

"It is shameful to spread hatred among the faithful," he told a political gathering.

A team of UN investigators earlier this month warned of a climate of fear in Burundi before the elections, with crimes against humanity and other serious violations continuing with impunity.

"The commission found that the eight common risk factors for criminal atrocities are present in Burundi," it said, insisting "the evolving situation must be monitored with the greatest vigilance".

The Imbonerakure especially have carried out killings, disappearances, arbitrary arrests and detentions, acts of torture and rape against actual or alleged political opposition members, investigators said.

In a surprise development, Nkurunziza announced in June last year he would not stand for election in 2020, confounding critics who accused him of working to extend his grip on power.At least 1,200 people were killed in violence in the wake of the 2015 election and more than 400,000 displaced.

Relations soured between the government of Nkurunziza, a devout evangelical, and the Catholic Church after it opposed his third-term bid in 2015.