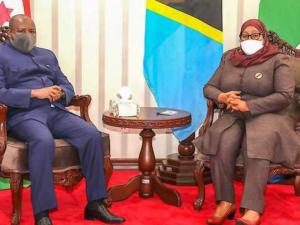 Burundi, currently under European Union sanctions over its human and political rights record, is asking its East African neighbours to help unlock its economic development potential.

Last week, Burundian President Evariste Ndayishimiye toured Tanzania on a three-day state visit to strengthen trade and investment. This was just three months after Tanzanian President Samia Suluhu paid a state visit to Burundi, resulting in several new infrastructure projects, including the construction of roads, and a renewed focus on the mining sector.

During last week’s visit, the two countries signed multi-billion dollar infrastructure projects, among them the construction of the standard gauge railway that will connect three countries up to the Democratic Republic of Congo, but whose financing is yet to be finalised.

The EU placed sanctions on some Burundian politicians and state officials and froze government financing in 2015, after a political crisis that followed former president Pierre Nkurunziza’s decision to seek a controversial third term. The ensuing violence left at least 1,200 people dead and 400,000 others had to flee the country.

The EU froze €432 million ($514 million) worth of funding and Belgium blocked disbursement of €60 million ($70 million) to Burundi, which depended on foreign aid for most of its budget.

Friendly neighbours
Burundi has now turned to her neighbours for assistance.

“We want to thank Tanzania for efforts to strengthen relations within the EAC and its support to have our sanctions lifted,” said President Ndayishimiye during his Tanzania visit. “We also wish to thank President Uhuru Kenyatta of Kenya, Yoweri Museveni of Uganda, and the EAC’s role that led to the reduction of economic sanctions.”

Even with President Ndayishimiye’s ascension to power last June, the political crisis in the country is far from being resolved and restrictions on democratic space are still in place.

According to the EU, the government has not taken any steps to bring the perpetrators of violations to justice, including those facing EU sanctions.

In May, President Ndayishimiye made a two-day state visit to Kenya where, with President Kenyatta, they announced the use of Kisumu port as a transit route for goods destined for Burundi.

About 315,000 Burundians are still sheltering in other nations, according to the United Nations refugee agency.

According to Burundi Security Minister Gervais Ndirakobuca, the country expects 150,000 refugees to return this year. More than 21,000 refugees have been repatriated since the start of 2021.

The country has also applied to join the Southern African Development Community (SADC), of which Tanzania is a member.

“Tanzania has agreed to support our membership bid in the SADC and also call on the countries that imposed economic sanctions on us to lift them. Diplomatic efforts are underway to remove all barriers and sanctions fully lifted,” said President Ndayishimiye.

Burundi has for many months been struggling to join the regional bloc but to no avail. In 2016, the SADC ministerial committee sent a delegation to Burundi to assess its eligibility to join the bloc, which was rejected.

As the country fights for the lifting of the EU sanctions, President Ndaysihimiye has is looking to use its neighbours’ goodwill to steady the economy.