Burundi takes over Chairmanship of EAC : Resolutions of Arusha Summit 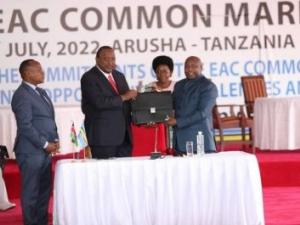 The President of Burundi, Evariste Ndayishimiye has been elected chairman of the East African Community (EAC) during the 22nd Ordinary Summit of EAC Heads of State held in Arusha, on Friday July 22, 2022.
Ndayishimiye will take over from his Kenya counterpart, President Uhuru Kenyatta who assumed office in March 2021.
He was announced as new EAC leader, by the outgoing chairman, Kenya’s President Uhuru Kenyatta during the closure of the two-day summit held in Arusha.

Resolutions of the summit indicate that the summit received an update on the integration of the Democratic Republic of Congo (DRC) where the council of ministers and EAC Secretariat will expedite and finalize the implementation of the roadmap of integration and report to the 23rd Meeting of the Summit.
During the summit, Rwanda was represented by Prime Minister, Dr. Edouard Ngirente. DRC was also represented by Prime Minister, Sama Lukonde.

Resolutions of the summit show that EAC appointed President Uhuru Kenyatta to oversee the implementation of Nairobi process as provided for in the modality for the establishment and functioning of the EAC panel on eminent persons and for the deployment of special envoys.
The summit also resolved that a special fund will be established to support the implementation of the process and decided to expeditiously deploy a joint regional force in eastern DRC.

Somali continues to push for admission into EAC

The summit noted that the verification exercise for the admission of the Federal Republic of Somalia into the East African Community had not been undertaken and directed the council of ministers to expeditiously fast track the verification exercise in accordance with the EAC procedure for admission of new members into the EAC and report to the 23rd Meeting of the Summit.

The President of Somalia, Hassan Sheikh Mohamud who was part of the meeting reiterated his country’s commitment to join the regional bloc.
The summit also noted that the council of ministers had concluded the roadmap for the integration of South Sudan into the community.

Inclusion of Kiswahili and French as official languages

The summit also named Gacuko Leonard from Burundi as a Judge of the East African Court of Justice in the first instance division with effect from 22nd July 2022.
Among others, the summit also thanked judges Monica Mugenyi, Geoffrey W.M. Kiryabwire and Audace Ngiye for their dedicated service to the community and wished them well in their future endeavours.

Bazivamo ends tenure
The summit noted that the tenure of the Deputy Secretary General of EAC, Christophe Bazivamo will end in September 2022.
The summit commended him for dedicated service to the community and wished them well in their future endeavours.

Bazivamo held the position since 2016.
Prior to the appointment, he was a parliamentarian of the East African Legislative Assembly (EALA).
He also held different duties in the Government of Rwanda between 2009 and 2011.

With this regard, the President of Burundi, Ndayishimiye will be serving the Chairperson of EAC replacing Uhuru Kenyatta.
The summit thanked Uhuru Kenyatta for having chaired the community and his stewardship of the affairs of the community during his tenure since 27th February 2021.
https://en.igihe.com/news/article/burundi-takes-over-chairmanship-of-eac...