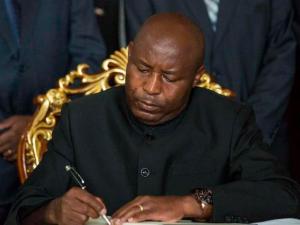 A presidential decree dated March 5, 2021 and made public on Monday granted amnesty to 5,255 inmates countrywide with the exception of those who committed crimes against humanity and other major crimes.

It grants amnesty to “prisoners definitively sentenced to less than or equal to five years for all offences with the exception of genocide, crimes against humanity, war crimes, armed robbery, illegally owning arms, armed robbery, terrorism machinery or bioterrorism, voluntary homicide, rape, and human traffickers.”

Inmates convicted of other minor crimes, pregnant women or those with children in the prison, minors, prisoners with chronic diseases, prisoners aged 70 years and above and inmates with mental disorders are expected to benefit from the president’s amnesty.

“Those convicted of corruption and/or corruption-related offences regardless of the sentence imposed, provided they have paid the amounts of embezzlement and the damages and interest pronounced by the courts and tribunals will benefit,” the statement reads.

This comes as the president has launched a clampdown on corruption that is said to have greatly impacted the country’s economy for decades.

According to Transparency International report of 2020, Burundi ranks at 165 out of 180 countries in the corruption index.

Dozens of government officials, including law enforcers (police), have been arrested for corruption and relieved from their duties indefinitely.

They were sentenced to two and a half years in prison, and were released on Christmas Eve after spending 430 days in jail.

The four journalists were arrested in October 2019 while reporting in Bubanza province on the insecurity that befell in the region. They were accused of attempts of conspiracy that undermined the country’s internal security which the four journalists refuted and argued that they were only doing their work.

In June 2020, the court dismissed their appeal and they were sent to Bubanza Prison to serve their sentence, but they were granted a presidential pardon later in the year.