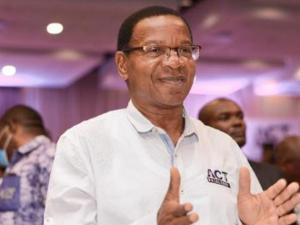 Cash-strapped Tanzanian opposition parties have stepped up their fund-raising efforts to finance their campaigns as they face the ruling party, Chama Cha Mapinduzi, which enjoys a solid financial base.

The Alliance for Change and Transparency (ACT-Wazalendo) says it has a huge deficit in its Tsh13 billion ($5.6 million) presidential, parliamentary and councillorship campaigns budget, which it is seeking to plug through open as well as clandestine tactics.

The ACT-Wazalendo presidential candidate, Bernard Membe, says his party is fundraising from “smart businessmen” and well-wishers within and outside Tanzania.

Mr Membe, whose travel to Dubai on Thursday, September 10, raised speculation on whether he was going to fund-raise, says he is appealing for funding from businesses but countered that he went to attend to a board meeting of an un-named company after skipping others earlier this year due to the coronavirus pandemic.

The former Minister for Foreign Affairs parted ways with President Magufuli after a leaked audio clip tapped from his telephone conversation revealed his plot to challenge President John Magufuli’s bid for a second term.

He was unceremoniously dismissed from CCM before he joined the newest opposition political party, ACT-Wazalendo, which made him its chief advisor and was later picked as its presidential contender.

Mr Membe says his party is soliciting cash from businessmen who donate under strict anonymity for fear of being targeted by the current administration after the October polls.

He called on the businessmen who shy from contributing to the opposition “to overcome fear.”

“We are Tanzanians. We have so many friends within Tanzania, Africa and elsewhere who can donate to us,” he added.

By law, Tanzanian political parties are entitled to receive public funding for their functioning but not for campaigns. The public funding does not include direct campaign financing in election periods.

Political parties are also allowed to receive funding from private sources. The Elections Expenses Act (2010) regulates election expenses and controls the use of funds and illegal practices, establishes penalties for breaches of the law, and restricts foreign funding for election expenses.

Its presidential candidate, Tundu Lissu has been wooing supporters to donate, with the party distributing posters through the social media with instructions on how to fundraise.

The ruling Chama Cha Mapinduzi (CCM) which is the wealthiest in terms of government subsidy and investments, is not known to fundraise publicly in all elections.

However, well-wishers and members supports the party and individual candidates financially.

Tanzania has rejected donations fron the United Nations Development Programme (UNDP) for its election budget, meaning election observers from the agency will not monitor the October polls.

“One of the conditions for the contributions is to bring international observers but this year they are not coming because the (government) has refused to accept the money…only a few embassies will observe the election,” he said.

Prof Palamagamba Kabudi, Minister for Foreign Affairs, says15 EU countries have been allowed to observe the elections after their embassies made applications and followed the laid down procedures.

Mr Kabudi was speaking after consultations with the EU Ambassador to Tanzania and the EAC, Manfredo Fanti, who said the European bloc has been following closely the campaigns and it is satisfied with the way campaigns are being held.