Catholic priest arrested in France over role in Genocide 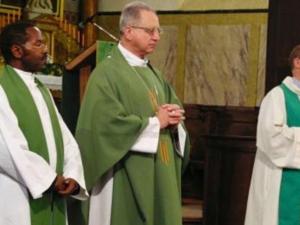 Marcel Hitayezu, a Rwandan priest living in France was arrested on Wednesday at his home in Montlieu-la-Garde, southwestern France, on charges related to his role in the 1994 Genocide against the Tutsi.

Reports from France indicate that Hitayezu was until his arrest on Wednesday, the vicar at the Montlieu-la-Garde church, located in southwestern France.

According to media reports, Hitayezu, who was born in 1956, was charged on Wednesday with genocide and being an accomplice to crimes against humanity, according to the French national anti-terrorism prosecutor's office.

Prosecutors said Hitayezu was the priest at a church in Mubuga, in southern Rwanda, when the genocide took place and in April 1994 withheld food and water to the Tutsi who had sought refuge in his church. He instead gave food to extremist Interahamwe militia who attacked the refugees, prosecutors noted.

Hitayezu denied the charges at his initial appearance before a judge, the prosecutor's office said.

According to Alain Gauthier, president of Collectif des Parties Civiles pour le Rwanda (CPCR), a rights group which has for nearly two decades worked to bring Genocide suspects living in France to book, the Investigation Chamber of the Poitiers Court of Appeal had, in July 2016, issued a favorable opinion for the extradition of the priest who was part of the pastoral team of Mubuga, in 1994, in the region of Kibuye in Rwanda.

In October 2016, he said, "the Court of Cassation, faithful to a case law that we still do not understand, quashed this judgment."

Rwanda had sought to extradite Hitayezu, but France's Cour de Cassation, the country's highest criminal court, in 2016 rejected the request, as it did similar requests by Kigali for others suspected of having taken part in the Genocide when more than one million people died in 100 days.

It is reported that Hitayezu spent three years in refugee camps in eastern DR Congo before arriving in France in 1998 or 1999.

He was given refugee status in France in 2011.

Another priest who has taken refuge in France, Wenceslas Munyeshyaka, was also accused of participating in the 1994 massacres especially in Kigali.

But his case was dismissed by the courts in France, a decision that angered Genocide survivors.

Munyeshyaka, previously convicted of genocide-related crimes by a Rwandan Gacaca court in absentia and whose case had been referred to France by the Tanzania-based International Criminal Tribunal for Rwanda (ICTR), was the vicar at the Sainte Famille parish in Kigali during the Genocide.

He is accused, among others, of taking part in killings in various parts of the capital Kigali and handing over Tutsi women who had sought refuge at his church to militiamen to be raped.

However, French judges in 2015 granted an earlier request from the country’s prosecutors to drop the case citing lack of evidence, alarming many observers and Genocide survivors.

Earlier, last week, prosecutors in France requested that Genocide suspect Philippe Hategekimana, alias Biguma, one of the most wanted masterminds of the 1994 Genocide against the Tutsi, be referred to the country's cour d'assises, or Assize Court, a criminal trial court that handles cases of genocide and war crimes.

Also, French historian Vincent Duclert on April 9, officially handed over to President Paul Kagame the report of the Commission he chaired on France's role in the 1994 Genocide. His report concludes that France bears heavy and overwhelming responsibilities over the 1994 Genocide but makes no mention of any evidence of French complicity.

Yolande Mukagasana, a Genocide survivor and president of the Yolande Mukagasana Foundation whose objectives include fighting against genocide denial and revisionism, said the news about the Hitayezu's arrest "would have been good news" considering his role in the massacres but that is not the case because the development makes me question many things."

"Five years have passed since the Rwandan Prosecutors pressed charges and issued an extradition request, yet France refused to hand him over. How many people who would have testified against him have passed on since then?" Mukagasana posed.

"How about father (Wenceslas) Munyeshyaka? For how long will they protect him? When and how will the impunity enjoyed, in France, by the many fugitives hiding from justice who perpetrated the 1994 Genocide end?

"France, more than any other European countries, became a home for those who fled after massacring the Tutsi and a home for so many genocide deniers and revisionists. Could all this be window dressing? I will only believe when I see more than what is going on now, such as prosecution charges against Agatha Kanziga Habyarimana."

Kanziga, 80, is one of the core members of Akazu, a small elite group that orchestrated the Genocide against the Tutsi. She is number one of the top the known Rwandan Genocide fugitives living in France, despite an arrest warrant issued by Rwanda.

Kigali's extradition request was rejected by Paris in 2011 and there have never been any signs of a trial being set for her in France either.

In the past, french authorities denied her a residence permit. But they also never expelled her from the country.

Mukagasana stressed that she is only heartened by one fact. People age and die, she said, but the crime of genocide never ages and never dies.