Chadema, ACT-Wazalendo deliberate on their next political move 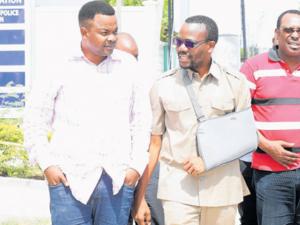 Chadema and ACT-Wazalendo are holding indoor meetings to deliberate upon new strategies of conducting politics. This is in the wake of crackdown on the opposition, including arrests of their leaders and members and the foiling of peaceful demonstrations that were called on November 2 to protest 2020 elections results.

However, the protests were foiled by tight security across the country.

The two leader, Mr Mbowe and Mr Kabwe, told The Citizen at Oyster Bay Police Station yesterday that they were still deliberating their next move through indoor meetings.

“Indoor meetings are in progress to come up with new methods of resolving the current political atmosphere. But our goal for endless peaceful protests still stands,” Mr Kabwe said.

Mr Mbowe reiterated the same line of thinking saying demand for justice must be sustained.

“We are here to report to the police as ordered. We’ll not stop organising ourselves to continue demanding for justice and the future of our party,” said Mr Mbowe.

For his part, ACT-Wazalendo secretary general (Mainland) Ado Shaibu told The Citizen that the party would today (Friday) brief reporters to announce its standing-point regarding the just concluded General Election and the fate of its members and leaders who are in hospital or police hands.

“We (the party) had a meeting on Wednesday in Zanzibar where we made several decisions that I’m not permitted to divulge to the public at the moment but will do so tomorrow (Friday),” he told The Citizen over the phone.

However, Mr Kabwe insisted that his party was currently focused on finding out the fates of its over 100 members who faced predicaments during and after the elections.

Since the elections ended and Zanzibar President Hussein Ali Mwinyi was sworn in, ACT-Wazalendo’s main grievances include arbitrary arrests of its members and leaders as well as lack of knowledge on the whereabouts of tens of its members.

Further, there have been allegations of attacks on unarmed demonstrators by the police, during which one of the leaders, Mr Ismail Jussa Ladhu, a senior Party (Zanzibar) official, was seriously injured and detained by security officers when he attempted to go and witness vote-counting.

Mr Jussa, who sustained serious injuries including broken limbs, has been hospitalized in the Isles.

The party further reported it was also looking for 30 other party members who were reportedly apprehended by the security forces.

ACT-Wazalendo also claimed that a number of citizens were shot dead as they were confronted by the police, allegations that Inspector General of Police Simon Sirro refuted calling them baseless.

Further reports had it that Deputy Secretary General (Zanzibar) Nassor Ahmed Mazrui was also reported missing immediately after the elections and a few days later the Police admitted to having held him in their custody.

Party leader Kabwe told The Citizen that their main agenda was containing human rights abuses in the post-election era.

“Nassor Mazrui’s detention is the main issue to take it forward,” he stressed. Adding. “Our preoccupation for now is on the human rights abuses that happened during the election. Our people are persecuted. Hundreds of people are in police custody while tens of people are not seen for weeks.”

“I won’t comment on the Government of National Union (GNU) for now. GNU is not in my radar at all. What is important for me is to find Nassor Mazrui and hundreds of our members held by security forces,” he said.

This is even after party chairman Seif Sharif Hamad had told The Citizen recently that the GNU matter would be decided by the party.

“If they want a GNU government it has to be their initiative to communicate to us,” he said.

However, noting that the party ACT-Wazalendo had the prerogative to decide whether or not to accept and not him.

During his swearing in as President Hussein Ali Mwinyi promised to honour the reconciliation as stated in the Constitution.