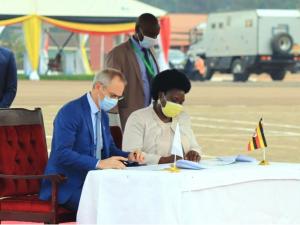 The so-called Final Investment Decision should pave the way for the export of millions of barrels of black gold that was first discovered in 2006 in Uganda, one of the world's most biodiverse regions.

The decision gives the final go-ahead to the long-delayed project and was hailed by Ugandan President Yoweri Museveni as an major economic boost for the landlocked East African country where many live in poverty.

Critics charge however that the ambitious scheme threatens the livelihoods of tens of thousands of people and fragile ecosystems in the heart of Africa.

The $10 billion investment deal was announced at a ceremony in Kampala by the heads of France's TotalEnergies and the local arm of the China National Offshore Oil Corporation (CNOOC).

The companies want to extract the huge crude oil reserves under Lake Albert, a 160-kilometre (100-mile) long natural border between Uganda and the Democratic Republic of Congo.

'A masterpiece'
The oil would be pumped from Uganda in a 1,443-kilometre (900-mile) heated pipeline -– said to become the longest of its type when completed -- through Tanzania to the Indian Ocean port of Tanga.

TotalEnergies chairman and CEO Patrick Pouyanne described the controversial pipeline as a "masterpiece".

"Today is the day we commit to invest $10 billion in the Tilenga and Kingfisher projects and the 1,443-km long pipeline," he said.

"From today with the FID, the project will fully enter into the construction phase."

Museveni admitted he had been impatient about the long negotiating process to get the project off the ground, but said the pipeline could become a "nucleus" for East African oil.

The project has been hit by various obstacles including wrangling over tax agreements and a change of heart over the location of the pipeline which was initially due to go through Kenya.

"Let the NGOs go and sleep in the bush if they want... There is nothing we are hiding."

Uganda's first oil is expected to flow in 2025 -- almost two decades after the reserves were discovered -- with full-scale commercial production planned for the following year when 230,000 barrels a day of the particularly viscous crude are expected to be pumped.

'Devastating' impact
In Uganda, the drilling is located in several nature reserves, one of which extends to Murchison Falls, the country's largest national park.

TotalEnergies, formerly Total, said last year it had taken steps to reduce the project's impact on people and the environment, but conservation groups charge it will be devastating.

The pipeline project would be "displacing thousands of households, endangering water resources for millions of Ugandans and Tanzanians, devastating vulnerable ecosystems and pushing the world further into climate chaos," campaign group 350Africa.org's regional director Landry Ninteretse said in a statement.

A report last year by the International Federation for Human Rights (FIDH) based on studies with Oxfam said the project would affect more than 12,000 families and communities had no idea if their land would be lost.

A consortium of Ugandan and French NGOs filed a lawsuit in 2019 against the French company accusing it of failing to abide by legal obligations to protect the environment and the rights of the people affected by the project.

In December, the Court of Cassation, France's highest, ruled the case should be heard in a civil court rather than assigned to a commercial tribunal, in what the activists said was an important victory.