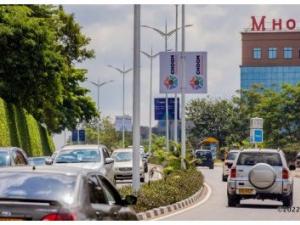 There are few days to go for Rwanda to host the Commonwealth Heads of Government Meeting (CHOGM) due in the week starting from 20th June 2022.
Preparations in different parts of Kigali City including the upgrading and construction of new roads are in final phases while more efforts are underway to make Kigali City more attractive.

Among others, signposts welcoming over 2000 guests attending the meeting and giving a glimpse of the country’s progress in preparations have been erected in Kigali.
However, construction works for some infrastructures including roads in Kacyiru, Kicukiro and Nyabugogo Bridge are ongoing.
Kigali City Vice Mayor in Charge of Urbanization and Infrastructure, Dr. Merard Mpabwanamaguru has told RBA that efforts are ongoing to finalize all preparations.
“We have built roads in Kigali. We encourage residents to use them appropriately to reduce traffic congestion,” he said.

The infrastructure development is part of Kigali City’s project to build more than 200-kilometer roads in four years.
The first phase drew emphasis on urgent roads to be used during CHOGM while the second phase will be launched after the meeting.
“The first phase drew much attention on urgent roads to help us reduce traffic jam in the city. They were given priority because the meeting was on the agenda by the time we started the project,” said Dr. Mpabwanamaguru.

As the meeting draws near, Kigali dwellers have expressed worries that construction activities might not be completed before and advised relevant authorities to expedite the projects.

Dr. Mpabwanamaguru has revealed that roads under construction will have been finalized by the beginning of the meeting.
“Many roads including the one in Kacyiru and Kimicanga are being finalized. Some parts have been already tarmacked. Others will have been completed between 10th and 11th. The remaining work will be predominantly about creating gardens and other activities to be done between 12th and 14th June 2022,” he noted.
“We are optimistic that these infrastructures [roads] will be used with lights installed along them,” added Dr. Mpabwanamaguru.

Residents in buildings along roads have been also urged to expedite renovation works and spray new paints to make them look attractive.
Dr. Nkurunziza Joseph Ryarasa, the Spokesperson of the Civil Society Platform has said that a lot has been done but stressed the need to do more to improve the smartness of Kigali.
“Residents need to be updated on the meeting lest they are improvised. There is a need for sensitization to keep reminding them to maintain hygiene as a routine not only during the period of meetings,” he noted.

At least 20 Smart Bus Shelters are being constructed along the road from Kigali International Airport to the city centre. The facilities built at bus stops will shelter passengers awaiting buses.
The smart bus shelters will be equipped with facilities like LED advertising and entertainment screens, LED lighting, WiFi and other accessories like charging ports.
Dr. Mpabwanamaguru has said that these facilities will be installed gradually.
“All required facilities will not be ready during CHOGM but they [smart bus shelters] will be used,” he said.
“We are going to expend much effort to get them completed. We want these shelters set up in all parts of Kigali where passengers using them will access information regarding the next bus to pick them and available seats among others,” disclosed Dr. Mpabwanamaguru.

Dr. Mpabwanamaguru has assured that the bridge might be ready for use in 14 days.
Construction of a flyover in Kicukiro is underway while side roads have been also upgraded.
More preparations are ongoing in different parts of Kigali designated as Car Free Zone in Nyamirambo and Gisimenti in Remera.
Public latrines will be also built in these places before CHOGM.
https://en.igihe.com/news/article/pictorial-chogm-draws-near-as-kigali-m...