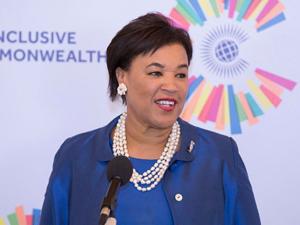 Heads of Government are expected to decide on the next substantive Secretary-General of the Commonwealth Secretariat in Kigali this week.

Although the decision is made by consensus, should the leaders decide not to reappoint the incumbent Baroness Patricia Scotland — who has served her first term for six years instead of four — a vote will take place. The pandemic forced the postponement of an election in 2020.
A Commonwealth Secretary-General can serve a maximum of two terms of four years each.

“The election of the new SG is one of the most important items on the agenda. The issue was already in dispute because the current SG is seeking re-election yet many members are against her,” a diplomat told The EastAfrican.
The incumbent faces opposition from Jamaica’s Foreign Affairs and Foreign Trade Minister Kamina Johnson, who has already been endorsed by two influential members of the bloc, the UK and India.

Commonwealth candidate sells her agenda, Jamaica calls for change
Ms Scotland was elected to the post at the Commonwealth Heads of Government Meeting (CHOGM) in Malta in 2015, and took office on April 1, 2016, becoming the second secretary-general from the Caribbean and the first woman to hold the post.

Her first term was supposed to end in 2020. However, the 54-member states agreed to retain her as the pandemic disrupted the CHOGM schedule and subsequent election of an SG.
However, Ms Scotland, who belongs to the UK’s opposition Labour party, does not have the support of the current Conservative government led by Prime Minister Boris Johnson. The UK, the current chair of CHOGM, is reported to have led the campaign to oust her, insisting that a change of leadership is required at the Secretariat.

Under scrutiny
Ms Scotland came under scrutiny from the major funders of the Secretariat — the UK, Canada, New Zealand and Australia — after external auditors KPMG reported flouting of procurement procedures by the Secretariat, including querying a lucrative consultancy contract awarded to a company run by her close friend.
Ms Scotland has maintained that the contract was above board.

In February 2020, the UK withheld its £4.7 million ($5.76 million) voluntary annual contribution, demanding that the Secretariat improve on financial management. New Zealand and Australia also suspended their funding, calling for the implementation of recommendations by the external auditors.
The UK and New Zealand restored funding in March 2020 and June 2020 respectively, after a procurement review concluded that “processes have improved and are now generally well-designed, with some further opportunities for development.”

However, since then, there have been persistent calls for a change of leadership at the Secretariat.
Although it was Africa’s turn to head the Commonwealth as Caribbean candidates had already served twice, it is not clear why Africa decided against fronting a candidate.

In a May 12, 2022 statement, Jamaica said Ms Johnson’s nomination was put forward “in a context where a change of leadership was clearly deemed desirable by member states across regions”.
“In fact, over time, two member states [Kenya and Tuvalu] announced their candidature for the post of Secretary-General, signalling the pursuit of change by two regions [Africa and the Pacific]. Kenya’s candidature was recently withdrawn, with an expressed hope that another candidate would come forward.”
Ms Johnson’s candidature has now left the Caribbean member countries under Caricom, which had previously endorsed Ms Scotland, sharply divided.
In a statement issued on May 17, Belize Prime Minister John Briceno, who is also the chairman of the 15-member regional grouping, said “member states of the Community will vote for the candidate of their choice”.
Observers say, given that the Caribbean is divided, Africa, whose turn it was to serve, will influence the outcome of the election.

The candidates
Baroness Patricia Scotland is a British barrister, and served in many ministerial positions within the UK Government, most notably as the Attorney General for England and Wales and Advocate General for Northern Ireland.

At the 2015 Commonwealth Heads of Government Meeting she was elected the sixth Secretary-General of the Commonwealth of Nations. She is the first woman to hold the post.
Kamina Johnson-Smith became Jamaica's Foreign Affairs and Foreign Trade Minister in 2016. She holds a Bachelor of Arts Degree in French and a Bachelor of Laws Degree from the University of West Indies. She also has a Masters in Law Degree in Commercial Law from London School of Economics and Political Science.
https://www.theeastafrican.co.ke/tea/news/east-africa/choice-of-commonwe...