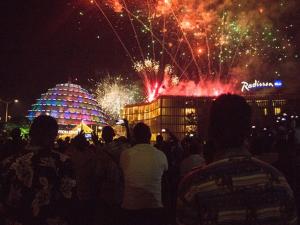 The City of Kigali will not display fireworks which have, in recent years, characterised the way the city ushers in the New Year, due to Covid-19.

“We are not planning to launch any fireworks in Kigali skies,” Pudence Rubingisa, the Mayor of the City of Kigali, confirmed.

The recent spike in Covid-19 cases prompted the government to institute new measures to deal with the virus spread, including extending curfew hours.

As a result, movements are prohibited between 8 pm and 4 am, which would make the viewing of fireworks by city residents difficult.

Although the City of Kigali won’t be launching its own fireworks, some organisations such as hotels can apply to have their own fireworks if they demonstrate that they will observe Covid-19 measures.

So far, the Mayor said, Kigali Marriott Hotel is the only institution that has been given a node to display fireworks. Others might also apply and be given green light.

In recent years, the City of Kigali has been leading the culture of welcoming the new with fireworks in Amahoro National Stadium and Kigali Stadium.