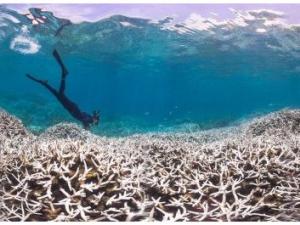 A new initiative launched today in the margins of the Commonwealth Heads of Government Meeting in Kigali, Rwanda, will support Commonwealth ocean states in cultivating and scaling-up projects that protect the marine environment while also tackling climate change.

With 47 out of 54 Commonwealth countries bordering the sea - including 25 small island developing states or ‘large ocean states’ - the Commonwealth Blue Charter Project Incubator will assist governments in developing pilot projects that accelerate their transition to sustainable and inclusive maritime development and conservation, while mitigating and adapting to climate change.

The initiative is supported by an initial contribution from the Commonwealth Fund for Technical Cooperation, with matching commitments from various partners, to the tune of approximately GBP 400,000 in total, with more expected in the coming year. Focusing on proof-of-concept and small-scale projects in particular, the incubator will be managed by the Commonwealth Secretariat, in close cooperation with member countries and Commonwealth Blue Charter Action Groups.

The project aims to address the dearth of financial support for ocean action worldwide, with Sustainable Development Goal 14 (‘Life Under Water’) receiving the least funding globally among all the SDGs. Small island and coastal states are particularly affected, with even fewer funding options for typically marginalised groups, including women, youth, indigenous peoples and local communities.

Deputy Secretary-General of the Commonwealth, Dr. Arjoon Suddhoo, said : “Commonwealth member nations are stewards of more than one third of the global ocean within national jurisdictions. Our island states have many times more ocean area than land… The pandemic over the past year has underlined how mutually reliant we all are upon one another. We now know that decisive joined-up, cooperative, multilateral actions are the only way to tackle global ocean challenges. There is no doubt that we need to redouble our efforts.”

Head of Oceans and Natural Resources at the Commonwealth Secretariat, Dr Nicholas Hardman-Mountford added : “The ocean sustains the lives and livelihoods of billions on this planet but its core life-support functions are critically threatened by climate change, pollution and unsustainable exploitation. Yet, the ocean continues to be eclipsed in climate financing discussions. SDG14 is the least funded of any of the sustainable development goals. For ocean investments to be sustainable Governments need to be supported to lead on the projects they know are most needed in their context. The Blue Charter Project Incubator will uniquely enable Governments to develop a pipeline of bankable projects to mobilise ocean financing where it is needed the most.”

Ocean Governance Adviser and Blue Charter programme lead, Dr Jeff Ardron noted : “There are many very good ocean incubators out there already, but none address the needs of governments. The Blue Charter Project Incubator fills that critical gap.”

All Commonwealth member countries will have access to the project incubator.

Among the many services it offers, the incubator will provide mentoring and technical support to governments on the development of ocean-related pilot projects that build social, ecological and climate resilience, while also facilitating project partnerships with non-governmental entities. It will review proposals, leverage seed funding for projects and encourage planning for sustainability and scaling up initiatives, including at the regional level. Support will also be provided through unique customised tools, including machine-learning.
Project ideas that ‘dare to be different’, offering innovative and cooperative solutions, while also engaging women, youth, indigenous peoples and local communities, will receive particular attention.

This new initiative continues the significant track record of practical solutions delivered by the Commonwealth Secretariat under the Commonwealth Blue Charter – an agreement by all 54 countries made in 2018 to work collaboratively to address global ocean challenges. It is implemented by 10 Action Groups, led by 16 champion countries.

Over the past four years, more than 450 officials from 40 countries have been trained in ten topic areas. Members have benefitted from 13 online learning courses and 15 resource ‘toolkits’ on various themes, such as mangrove restoration and ‘blue carbon’.

The long-term goal of the Commonwealth Blue Charter is to build on its track record of supporting countries through capacity-building, towards small-scale project development and eventually mainstream impact, with enhanced financial support via a potential dedicated ‘action fund’.
Find out more about the progress of the Commonwealth Blue Charter in the report ‘An Ocean of Opportunity’
https://en.igihe.com/news/article/commonwealth-unveils-new-project-incub...