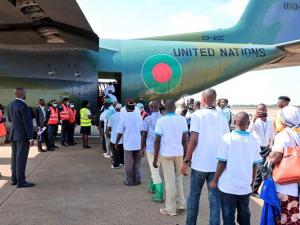 Uganda's government on Tuesday repatriated 70 Congolese ex-rebels and their families, who had volunteered to return home five years after they were defeated, the foreign ministry said.

The 70 ex-soldiers, as well as 10 family members, had all been members of a rebel group called M23.

He said United Nations officials watched as the group boarded a plane in Uganda's main airport in Entebbe.

The M23 were former members of a Tutsi militia who had been integrated in the Congolese army under a 2009 peace deal.

In 2012 they rebelled again, claiming the deal had not been respected.

They briefly seized DR Congo's eastern city of Goma, but a year later they were defeated and forced out of the country by a joint UN and Congolese army offensive.

Several hundred ended up living in a Ugandan-run camp in the west of the country. The 70 who flew back on Tuesday are not the first to go home, with a total of 316 now having been officially repatriated.

However, others went back earlier. In 2017, Human Rights Watch accused the Kinshasa government of recruiting ex-M23 soldiers to suppress protests.