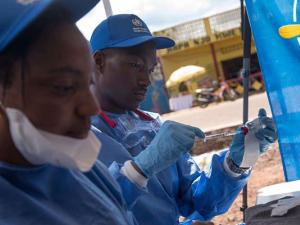 Congo will not permit the use of further experimental vaccines as it combats an Ebola outbreak because doing so risked “confusing the population,” the government said on Friday.

Health worker measures the temperature of a man entering the ALIMA (The Alliance for International Medical Action) Ebola treatment centre in Beni, in the Democratic Republic of Congo, April 1, 2019

Health workers have vaccinated more than 130,000 people during the nearly year-long epidemic in eastern Democratic Republic of Congo with an experimental vaccine manufactured by Merck that has proven highly effective.

But the outbreak, which is the second worst in history, continues to spread, due largely to mistrust by people in eastern Congo of the response and armed attacks against health workers that have limited access to patients.

“Due to a lack of sufficient scientific evidence on the efficacy and safety of other vaccines, and the risk of confusing the population, it was decided that no clinical trial of vaccines will be authorised [...] during the current Ebola outbreak,” the health ministry said in a daily bulletin.

But the government did not rule out using other vaccines in the future, “once their efficacy has been proven,” a government directive to health workers said on Wednesday.

In May experts advising the World Health Organization recommended that other vaccines be introduced to help ensure that vaccine supplies last and specifically mentioned a new experimental vaccine manufactured by Johnson & Johnson.

“There are legitimate concerns that the stock of the Merck vaccine is not sufficient to sustain any increased flow of supply for more than a few months, and there is unfortunately no guarantee that this epidemic will be controlled by then,” Natalie Roberts, Medecins Sans Frontieres’ operations manager, told Reuters.

The Congolese government said there were currently no issues with the supply of the Merck vaccine.

Misinformation propagated by some community leaders in eastern Congo has led people to refuse vaccinations or treatment, and the government fears using a second vaccine would stoke further conspiracy theories.

More than 2,400 cases confirmed and probable cases have been registered since the outbreak was declared last August, including over 1,600 deaths.