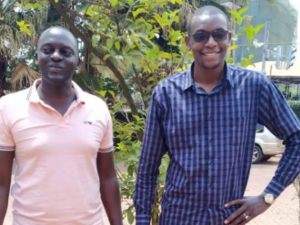 Ugandan satirical author Kakwenza Rukirabashaija, who is accused of disseminating offensive communication against the First family, has been released, a constitutional watchdog announced Wednesday.

“Ugandan novelist Kakwenza Rukirabashaija was released this morning and is being taken for medical attention,” the Center for Constitutional Governance (CCG) said in a brief Twitter statement.

The 33-year-old activist was granted bail on medical grounds and was released from Kitalya Prison in Kampala on Tuesday.

But just moments after walking out of the prison, he was picked up by suspected security operatives and forced into a tinted vehicle with no number plates. The car then sped off, according to his lawyer Erin Kiiza.

This sparked an uproar on social media.
And his lawyer, Mr Kiiza, on Tuesday told journalists that his client had been “kidnapped” by military men.

Following the incident, the European Union and the US called “for his release, consistent with the magistrate's order.”

“We also continue to monitor closely actions by individuals to undermine rule of law and democracy in Uganda,” the US Mission in Uganda said.

“In democratic societies, rule of law and judicial independence must be respected, especially by security agencies.”