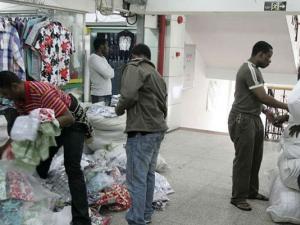 Kenyan businesses that rely on imports from China have expressed fears that they may be forced to close shop as the Covid-19 coronavirus outbreak affects exports from the country.

Latest data from WHO show that there were 80,239 confirmed cases of coronavirus globally by Wednesday.

Employees of Kenyan companies that depend on Chinese imports, who spoke to the Nation, say they are living in fear of job losses.

On the other hand, small traders are concerned that they may have to reconsider their operations.

For instance, Varinia Luvega who imports clothes, shoes, watches, and household goods to sell online has been in despair since January.

After losing her job in early 2019, she decided to get into the online business space, selling goods via social media groups and was planning to import on a monthly basis to expand her sales.

“My business has gone back to zero. I haven’t been able to import anything. We are just waiting to see how it goes,” she said.

Ms Luvega had taken advantage of the flexible importation terms in China that favour many small investors locally.

According to her, a trader can import single items from China instead of bulk goods as is the case with other countries.

She says she can easily import a single dress, pair of shoes, a watch or kitchen appliance for a client instead of importing in bulk.

“Right now most suppliers are not working. For the few who are available, it will take them at least 15 days to clear in China alone. The wait will be longer once goods arrive in Kenya and such delays do not auger well with many customers,” she explained.

Ms Luvega says the entire process would normally take not more than three weeks from the moment an order is placed to delivery.

Although the World Health Organisation (WHO) says in its guidelines that it is safe to receive goods from China despite the deadly coronavirus outbreak that has so far killed more than 2,000 people and infected more than 70,000 others, importers in Kenya say they are experiencing restrictions on handling of goods from China.

Dancan Wasilwa, proprietor of Trendy Designer Wear, says he is running out of stock fast at his shop in Nairobi’s city centre.

He is among many Kenyan youths who decided to venture into entrepreneurship straight from college to beat unemployment.

Now, he says he has about four months before he runs out of stock and is forced to import from other countries, which will be an expensive cost.

“My current stock can last up to four months. We are considering other options but they might be costly. We attract more customers when prices are low,” he said.

Fabric importers have not been spared either with sources at the Athi River Export Processing Zone (EPZ) saying workers are worried of job losses.

An employee at a textile factory who requested anonymity for fear of reprisal said there are concerns that they might run out of fabric soon.

Kenya’s textiles industry is heavily reliant on fabric from China, Hong Kong, and Sri Lanka. Both Hong Kong and Sri Lanka have confirmed cases of coronavirus.

Similarly, the electronics and electrical industry has been struck.

Ms Anne Munderu from Raerex East Africa Ltd disclosed that the company’s business hit a brick wall since January due to lack of crucial equipment that are sourced from China.

The company based in Nairobi deals in delivery, installation and maintenance of heating, ventilation, and air conditioning equipment across East Africa.

“There is nothing we can do. People know what is happening but clients don’t like it when their projects delay. Several projects are on hold and it is very hard to explain the situation to clients,” she said.

Worse still, she disclosed that the company which has about 100 employees had already paid its suppliers in China, making it difficult for the firm to seek alternatives.

“Once you have paid 100 percent for your delivery, how will you go back to seek refund? The terms are clear that there are no refunds once goods are paid for.

“At the moment it is also getting difficult to get in touch with some suppliers. We don’t even know if they will ever be back to business,” she says.

Last week, fishermen in Lamu at the Kenyan coast, who export lobsters to China, decried losses after they were forced to sell their catch in the local market at throwaway prices.

Kenya has become a major importer of goods from China in recent years. Data from the Kenya National Bureau of Statistics (KNBS) show that in the first six months of 2019, it imported goods worth Ksh169.6 billion ($1.69 billion).

Last week, Kenya Airways acting chief executive Allan Kilavuka said the firm has lost Ksh800 million ($8 million) in revenue in about one month since it suspended its flights to China as a precaution against the deadly virus.

Mr Kilavuka told The EastAfrican that China is a key cargo origin as well as a main feeder to the regional freighters, and the suspension of flights since the end of January has dealt a big blow to the airline’s revenues.