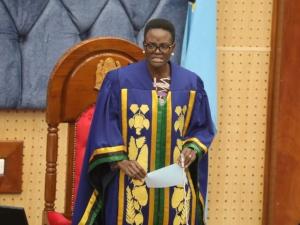 Dar es Salaam. Chadema will have to wait longer than expected to see the 19 MPs out of parliament, this is after the Speaker of the National Assembly, Tulia Ackson on Monday May 16, said she was waiting for a court’s decision regarding the matter.
It was not immediately established when exactly the MPs filed the objection of their expulsion with the High Court.
The 19 special seats Members of Parliament were expelled by last week by the party’s governing council that sat in Dar es Salaam.
She was speaking in parliament whereby she admitted that she had received an email from Chadema's General Secretary John Mnyika regarding the status of the MPs.
She, however, said that she was informed by the 19 MPs that they had already filed a case at the High Court against the Chadema’s decision to strip them of party membership by the Central Committee and later the party’s governing council rejected their appeal.
“According to our constitution the authority responsible for justice is the court. So in a country that is led by the rule of law one pillars should not interfere with the duties of the other,” she said.
The Speaker added that: Parliament cannot interfere with the judicial process and must await a court decision.
In addition, she said that she is the only responsible to speak anything regarding the matter of the 19 MPs.
“If there are questions on these lawmakers the one to be asked is the Speaker and should the court decide otherwise I will come and announce here,” she said.
While the Speaker was speaking of the matter, 10 of the 19 MPs, were present in the house with some asking questions to ministers on various issues.
Those appeared in parliament today are; Sophia Mwakagenda, Conchesta Rwamlaza, Cecilia Pareso, Tunza Malapo, Grace Tendega, Jessica Kishoa, Nusrat Hanje, Esther Matiko, Kunti Majala and Hawa Mwaifunga.
On May 11, 2022 Chadema’s governing council voted unanimously to expel the 19 special seats Members of Parliament who were allegedly sworn in without the blessing of the party.
Commenting on their expulsion, Former Kawe MP Halima Mdee said the voting process was clouded with intrigues and lacked transparency