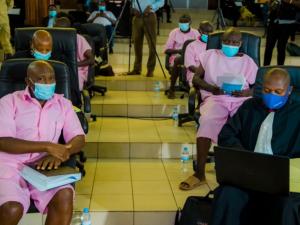 'Hotel Rwanda' hero Paul Rusesabagina (left) with his lawyer and co-accused in a courtroom in Kigali, Rwanda, on February 26, 2021. PHOTO | CYRIL NDEGEYA| NMG

A three-judge panel has ruled that Paul Rusesabagina's trial will be held in Rwanda, quashing his request for the case to be moved to Belgium where he is a citizen.

"Both Rwandan and Belgian courts have the jurisdiction to try Paul Rusesabagina, and that there is no justification for his trial to be moved and conducted by Belgium as he had requested," the court ruled on Friday.

Mr Rusesabagina, 66, had questioned the court’s jurisdiction in hearing his case since he was a Belgian citizen.

But the prosecution argued that he never renounced his Rwandan citizenship, making him a dual citizen.

"The arguments by Rusesabagina that he should not be tried by this court are baseless. There is no reason this court cannot try him. Court finds that the High Court Chamber for International and Cross Border Crimes has the jurisdiction to try Rusesabagina given the grave nature of crimes he faces."

Mr Rusesabagina was made famous by the 2004 Hollywood movie Hotel Rwanda which depicts his heroic acts in saving over 1,000 people inside a hotel he managed during the 1994 Genocide against the Tutsis.

His high-profile arrest attracted international attention, while it also drew the ire of his family and international human rights organisations, which have insisted that he was illegally arrested and flown to Rwanda against his will.

His lawyer Gatera Gashabana said he would appeal the decision.