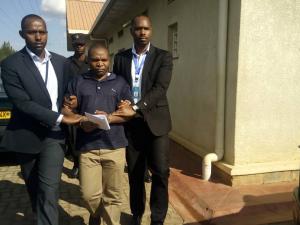 Kacyiru Primary Court has remanded Laforge Fils Bazeye, real name Ignace Nkaka who was spokesperson of the so called Forces de Defence et Liberation du Rwanda – FDLR and co-accused Lt Colonel Theophile Camara Abega, real name Jean Pierre Nsekanabo, the head of Intelligence of the same group to 30 days in prison on suspicion that the duo could return to the armed group.

Last week, the suspects appeared before this court located in Kibagabaga-Gasabo district to be informed of their offences.

The duo are accused of propagating messages intended to incite the public against government of Rwanda, forming and being part of an illegal group, terrorism and associating with a foreign country with an intention to cause war to Rwanda.

To be specific, the prosecution told court that in regard to terrorism, both suspects had a direct and indirect role in attacks that were staged against Rwanda.

The suspects and their lawyers however, defended that what they did was out of ignorance and said they have changed, and as a matter of fact are “cooperating with court to say the truth.”

FDLR leaders were apprehended last year at Bunagana border while crossing to Democratic Republic of Congo from Uganda which, they said, is facilitating talks between Rwanda National Congress and FDLR to plan war against Rwanda.