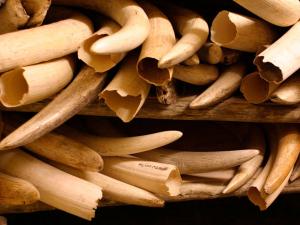 Dar es Salaam. The Kisutu Resident Magistrate’s Court will on May 26 rule whether to admit or reject 660 pieces of ivory which prosecution want them admitted into evidence in a Sh4.6 billion ivory smuggling case.

Twelve businessmen stand trial for 51 economic crime offences, including that of leading an organised criminal gang and smuggling the national trophies worth Sh4.6 billion.
The accused are also alleged to have been found in possession of $5,662 (about Sh12.27 million).
Lawyers defending the accused have strongly objected to admission of the ivory as evidence, arguing that the proper procedure and law of tendering them in court was not observed.

The objection came after the first prosecution witness, Wilfred Olomi, who is the custodian of the ivory at the natural resources ministry wound up his testimony and asked the court to admit the trophies as prosecution evidence.

The objection gave rise to a case-within-a-case that, on one side, allowed defence attorneys to establish the alleged malpractice and, on the other, accorded the prosecution disprove the allegations.

The case is heard by resident magistrate Rhoda Ngimilanga.

They were arraigned on May 5 and charged against them read by a team of senior state lawyers led by Harry Mbogoro, Theophil Mutakyawa who were being assisted by Janeth Magoho, Karen Mrango and Timotheo Mmari.

Prosecution has alleged in the first count that the accused led an organized criminal gang between January 2006 and June 2016 in Dar es Salaam.

During the period, the accused allegedly purchased, sold, received, transported and owned 660 pieces of elephant tusks worth $2.1 million the property of the United Republic of Tanzania.
They were arrested at Mbezi Msakuzi in Kinondoni District in possession of the trophies without having permission from the director of wildlife in the natural resources ministry
https://www.thecitizen.co.tz/tanzania/news/national/court-to-rule-on-sh4...