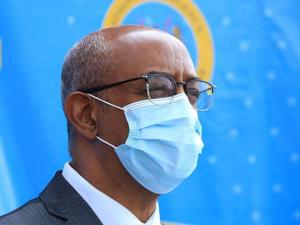 Kenya announced on Thursday that the total number of confirmed cases of Covid-19 in the country had risen to 396.

The ministry said a total of 20,268 samples had been tested in Kenya by April 30.

Dr Aman told the country that seven of the new patients were in Mombasa, three in Nairobi, eastern Kitui County one and one in Wajir, northern Kenya.

Dr Aman noted, however, that Kenya had discharged 15 patients—its highest number of recoveries in 24 hours since the first case of the virus.

This raised the country's total number of recoveries to 144.

Regarding testing, Dr Aman said that plans were in place for all cross-border truck drivers to be tested, following concerns about their transmission of the virus.

"Members of the EAC have agreed on a protocol for all Kenyans truck drivers to be tested from Mombasa to ease clearance at the border," he said.

On Tuesday, Health Cabinet Secretary Mutahi Kagwe told the National Assembly Health committee of a plan for mass testing that would cover 50,000 people at high risk of infection in two weeks.

The government banned movement into and out of these five counties, which are considered high risk locations.

Nairobi and Mombasa have continued to account for the highest numbers of infections in the country.

The case in Wajir, in eastern Kenya, was its first since the country confirmed its first case of Covid-19 on March 13.

On Monday, Wajir County Commissioner Jacob Narengo said that four people intercepted at Kenya's border with Somalia would be monitored at a local isolation centre.

Mr Narengo noted that they were quarantined as a precaution, especially since Kenya barred travel as a measure against the spread of the virus.

He also noted the surge in cases of the virus in Somalia, describing it as a wake-up call for the public, but said there was not yet a cause for alarm in Wajir.

A tally by Worldometer showed that Somalia had a total of 582 confirmed cases of Covid-19 by Thursday and a total of 28 deaths.

In Africa, the coronavirus had infected at least 38,263 and killed over 1,595, according to Worldometer's count on April 30.