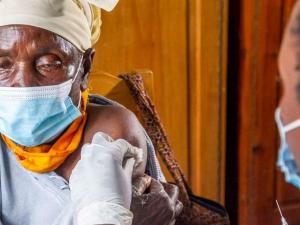 As part of the ongoing countrywide vaccination campaign, the Covid-19 vaccination has been narrowed down to the village and family levels. The aim is to help vulnerable people who cannot reach vaccination sites and educate those who are hesitant to take the vaccine.

Teams of youth volunteers, local leaders, and health professionals are now going door to door in all districts, administering the Covid-19 vaccine. The current campaign kicked off on January 16. It targets to vaccinate 1.5 million people before the end of January.

“Most of the people dying from the virus are the elderly in their 60s and 70s who are probably too weak to reach the vaccination sites. We have enough vaccines and capacity to reach them and that is our focus now,” said Dr Tharcisse Mpunga, the State Minister in Charge of Primary Health Care.

Decrease in infections
Rwanda has seen a drop in Covid-19 infections that had reached a peak during the festive season. The drop is shared by other African countries as cases fell by 20 percent while notified deaths dropped by eight percent, according to the World Health Organization’s African regional office reports.

Rwanda’s infection rate is now 3 percent from 6 percent in December and daily recorded cases declined from 600-900 cases recorded in a day to 300-600 cases. Unlike before when the capital Kigali recorded the highest number of new daily infections, data shows that rural districts in Rwanda are now the most affected.

The cabinet meeting that updates Covid-19 guidelines is expected to gather soon to review Covid guidelines.

The current guidelines dictate a 10pm-4am curfew, and businesses, except bars, are allowed to close at 9pm. Bars are required to close by 8pm.

Media reports have emerged that some Rwandans have been fleeing to neighbouring countries to escape “forced” vaccination.

“It is mostly because of their religious beliefs. We still need to educate these people and disseminate the right information about the vaccine. The doses we use are safe and should not come in the way of anyone’s beliefs. At this point, we have all seen the effectiveness of the vaccine in decreasing the number of Covid-19 related deaths,” explained Dr Tharcisse Mpunga during a virtual press conference.

Approximately 100 Rwandans who were reported to have fled to the Democratic Republic of Congo have returned.

As of Friday, the Covid death toll in Rwanda was 1,422, among which 27 deaths were recorded during the last seven days to Friday.

As of January 21, Rwanda had recorded a total of 127,227 cases, with 8,900 still active and 8 patients in critical condition, according to the Ministry of Health data.