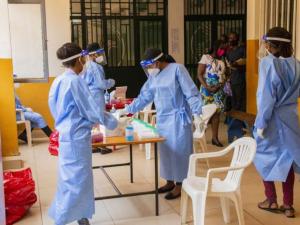 Rwanda has imposed a seven-day quarantine for passengers arriving in Kigali who have recently been to countries affected by the new Covid-19 variant.

All direct flights between Rwanda and southern African countries have been temporarily suspended.

The decision was taken to contain the new variant detected in South Africa and neighbouring countries last week and announced on November 25. Now known as Omicron, the new variant has already been confirmed in 13 countries.

The resolutions were made during an extraordinary Cabinet meeting on Sunday, which was called to discuss Rwanda’s response to the new variant. It was chaired by President Paul Kagame.

The new variant, B.1.1.529, is said to spread three times faster than the Delta variant.

Rwanda joins the European Union, the United States, Israel, United Arab Emirates, the UK, among others, that have suspended flights to southern Africa.

WHO, however, warns that it might be too late to impose flight bans as the new variant has already spread to a dozen countries.

The new variant has not been detected in Rwanda, according to the Ministry of Health.

But Rwanda has increased the number of Covid-19 tests taken in a day since November 26 from an average of 10,000 tests per day to almost double.

For the last few months, Covid-19 infections and deaths have dropped to less than one percent leading to the closure of all Covid-19 treatment centres and Covid-19 hospitals.

To further stem spread of Covid-19, Rwanda made vaccination obligatory for people to attend certain functions and meet in gatherings.

“People attending events/gatherings, including conferences, concerts, weddings, festivals or exhibitions, must be fully vaccinated and tested,” a statement released by the office of the Prime Minister says.

So far, 3.2 million Rwandans have been fully vaccinated while 5,944,102 have received the first dose, including children between the age of 12-17 years old.

Rwanda targets to fully vaccinate at least 40 percent of its 12.9 million population or 5.1 million people by the end of this year.

Health Minister Daniel Ngamije announced on the national broadcaster that the vaccine is the only shield against Covid-19 and its ever-mutating variants.

He urged residents to ensure they get the full dose of vaccination, get tested regularly, and adhere to the health guidelines in place.

“These variants are all derived from one virus which has a vaccine. Just like we beat Delta last year, we will beat this one as well,” Dr Ngamije said.

He added that the new variant comes at a worrying time when the festive season is approaching and called on the public to be cautious.