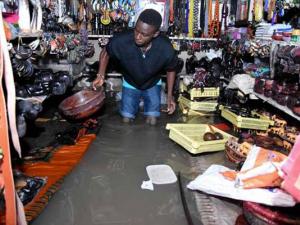 The rains began early morning forcing authorities to close some roads that were submerged. Many bridges were also flooded or damaged, forcing residents to look for alternative routes.

City dwellers who live in flood prone areas sought refuge elsewhere as their houses were filled with floodwaters. Some were able to salvage their property, while in other areas, property was damaged or swept away by floodwaters.

“I have lived here for over 12 years but I haven’t experienced this (floods). When the rain started I had already left the house and when I came back I found it flooded; I couldn’t save any of my property,” said a Tandale resident, Iddi Mkwawa.

The fire and rescue brigade has urged Dar es Salaam residents who are living in the lowlands to move to higher ground.

Most traders, especially in markets, complained of poor business due to the rains. But some enterprising residents capitalised on the floods and infrastructure damage to earn some money – they charged Tsh1, 000 to carry people on their backs across flooded areas.