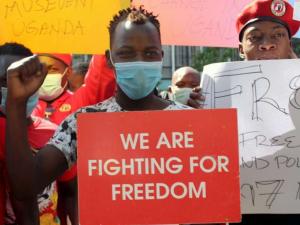 The pop star turned politician was arrested on Wednesday while on the campaign trail.

Police and medical sources said most of the victims succumbed to gunshot wounds.

At least 19 people were killed in the Kampala metropolitan area. Police, however, put the official figure at 16.

By Friday morning, Wine was still detained in a police station.

On Wednesday, protests broke out in different parts of the country after Wine’s arrest on allegations of violating guidelines to contain the spread of coronavirus.

The police were joined in by the regular army, the military police and special forces command to quell the protests.

Men dressed in civilian clothes armed with assault rifles were seen patrolling the city streets and also firing bullets at protesters and anyone who was taking their pictures.

It was not clear which security organisation they were attached to.